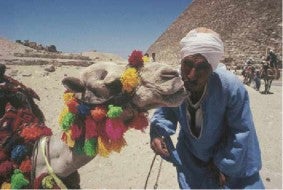 Anticipate the moment
Perhaps the hardest photographic technique to develop and the only one that isn’t connected to your camera equipment is knowing instinctively when to press the shutter. Developed as a sixth sense, the world’s best press, documentary and sports photographers all earn their crust by this single skill alone. Being able to predict exactly when to press the shutter and capture the defining moment of an event was first described by the French photographer Henri Cartier-Bresson. His best photographs are made at a single point in time when all the different elements in his viewfinder seem to collide in a great composition.

An alternative and no less interesting way of describing a scene is to move away from taking a single shot by shooting a sequence of a separate shots. Anticipate before the first frame when the sequence of activity should start, then follow the action by shooting several frames. As a good method for capturing people and family groups engaged in conversation or celebration, your results can look stunning when four or five shots are presented in a single photo frame.

Why this image works
Getting up close and filling the frame keeps focus on the action
If you’re on the ball, you can get quirky shots like this that add to a traditional travelogue

What makes a good travel picture?
The essence of a great shot is that it lets us later reflect on an event that happens in a flash . When you’re shooing out on location, the luck factor can never be over-estimated, but skilled photographers generate high success rates by being ready to shoot in an instant and getting in the right place at the right time. If you’re shooting a fast-moving event such as a procession or moving people, you need to make sure your camera settings are set before you start shooting. With ISO, white balance and aperture value established, set your camera on aperture priority mode then place all your efforts into stalking your prey.

With only framing and focusing to worry about, you can easily respond to a quickly changing environment. Don’t just seek out the dramatic landscape or the award-winning portrait, but build up lots of smaller details of your newly found environment. The best photo-journals and photo stories are those where the sum of the parts are greater than any single image. Aim to record your stay with a broad brushstroke, capturing smaller local flavours, textures and colours to build up a broader picture. If you’re really keen for a challenge, try and create a photo story that tells its tale without the need for additional words.