The show gets busy and Joby choose pedal power

The show was visibly busier as we entered for today’s meetings and it gave the place a real buzz as people flocked to check out the latest products. Kodak took us
through their latest line up, all of which were announced at CES in January. This included their premium Slice model with a 3.5in touch-screen and some sleek styling. Their main focus is around sharing your images and all of the new models feature the ability to upload your images to multiple locations (social networking sites,
photo sites, picture frames, email addresses) in just three steps,and for multiple images in one go, unlike other systems. The options are chosen on camera and once you plug it into your computer it automatically starts to upload – though this does rely on you installing the software first. Kodak’s latest frame looks pretty impressive too with full WiFi connectivity and touch-screen control.

HP’s stand is dominated by their lab printing abilities, having just landed some large contracts with supermarket brands Asda and Tesco, but they are also showing their latest range of all-in-one printers with full internet connectivity,
touch-screen control and some fun tie-ins with brands such as Disney for fun downloads for kids, and google calendars.

Sigma’s huge selection of new products was explained in more detail by their Chief Operating Officer, Kazuto Yamaki. The loyalty of their design team has meant that the same designers who produced their original lenses have been key to the designs of the new versions that we see today, and some have been up to five years in the making. Making lenses optically stabilised without making them much larger is a tough task he explained. Some of the new models feature FLD lenses; the F standing for a fluorite
property to the glass, and the LD standing for Low Dispersion.

Joby’s stand attracted a great deal of interest with its Gorillapod bike. This was a creation by their own design team in answer to a competition run to promote the Gorillapod and, despite its impressive looks, wasn’t able to be ridden. Joby did
have two new products too, in the form of a ballhead for the Gorillapod Focus and a Gorillapod Magnetic – a camera version of the torch model, with magnetic legs. 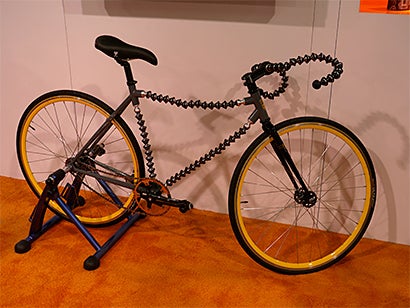