Television dramas such as the CSI series take many liberties with photographs, especially when it comes to forensic analysis, so letu2019s look beyond the CSI fiction to see what is really possible.

One of the first episodes of CSI (Crime Scene Investigation) that I watched some years ago started with the CSI investigators photographing a crime scene in the rain to preserve evidence that was about to be washed away. The photographs were shot using on-camera flash lighting yet the prints that were viewed later were flawless. In particular, there were no white “blobs” on the CSI prints – despite the fact that the flash would have been reflected from each and every raindrop.

Another common use of photography in CSI shows is to identify a person sitting in a car or photographed at a considerable distance in a highly enlarged picture, often as a face in a crowd. This is equally unrealistic, as any quick test will easily prove.

The picture shown above was taken as part of a test I have been conducting of APS-format superzooms for the October 2011 issue of What Digital Camera magazine, which will be published early in September. It was captured using a Canon EOS 50D fitted with Canon’s EF-S 18-200mm zoom set to its maximum focal length in dim morning light at f/5.6 and 1/160s using ISO 800. If we were in a CSI show and had to identify the driver, what chance would we have of succeeding?

The first thing to say is that the images reproduced here have been down-sized for web use and the analysis was all done using the original file: you cannot simply attempt to repeat the analysis using the files posted here!

A simple 100% view (see below) doesn’t allow the driver to be identified so we’ll have to try a bit harder.

One option would be to up-size the image, hoping to reveal more detail but this is based on a false assumption that resampling an image will show previously invisible detail. This simply isn’t possible: in fact it actually reduces sharpness by smoothing the boundaries between different areas within a picture. So although we can enlarge the image we will have to accept the fact that it will pixelate and if we reduce the size of the pixels then we will simply blur the information in the image. Nevertheless, given that we are using a subjective assessment tool in this case (our human eyes) up-sizing can make life easier even though it offers no technical advantage. 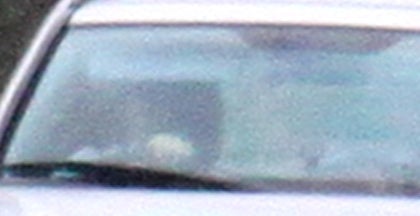 In a CSI show I suspect that either the enhanced image would magically be instantly recognisable or the feeble information seen here would somehow be enough for a firm identification to be made – but real life just isn’t like that. By all means enjoy these dramas but don’t expect their story-lines to be confined by the harsh realities of photographic life!