Sony's new Alpha NEX camera system, the NEX-3 and NEX-5, the latest addition to the growing Micro System camera market, has attracted a lot of debate and discussion online since it was announced ten days ago.

The jury is out on the design of the first cameras in the system, the Sony NEX-3 and Sony NEX-5 – some find them rather boxy and ugly, especially compared with the elegance of the Olympus Pen. Personally 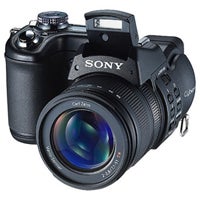 I’d like to see a future NEX that takes its design cue from Sony’s old Cybershot F828 (right), a highly innovative bridge camera from 2003/4 which sported a curvaceous, swivelling body with a superb Zeiss lens on the end. It would have been one of the greatest digital cameras of its time had it not suffered from the most appalling image noise. A bit of F828 DNA (shrunk down a bit, obviously) would improve the NEX’s pulling power no end.

But beauty is just skin deep and you can’t deny that the NEX-3 and NEX-5 has an awesome spec sheet, including arguably the highest spec video mode of any interchangeable lens camera. I say arguably because there is some debate about that 1080i resolution. It’s interlaced rather than progressive, and its a matter of debate in tech circles whether 1080i is as good as 720p. (For more on what this means there’s a useful video here that explains it).

No doubt the debate will rage on but the proof of the pudding is in the eating. A few movie clips have already found their way onto YouTube and Vimeo and this one, produced by Sony themselves, suggest that the doubters have little to worry about….

See our first look at the NEX system