This is a fairly heavy lens (645g) that feels solid and
well-built. It nestles nicely in the hand and has a broad, short-throw zoom
ring that occupies most of the front half of the lens barrel. There is a
smaller manual-focussing ring to the rear and a focussed-distance window at the
back of the lens with sliders below to set the focussing mode and to activate
the image stabilisation (IS) system.

Automatic focussing is brisk, accurate and quiet. It is also
internal, so the user’s grip is not compromised by having to keep fingers clear
of the focussing ring. Better still, when manual focusing is required the ring
is within immediate third-finger reach without requiring any significant change
of balance. Both rings offer just the right amount of resistance and it is
probably fair to say that, ergonomically, this is one of the best designed
lenses to have been tested for WDC’s lens reviews.

The IS system is said to allow exposures that are three
times longer than usual without any visible blurring. Practical tests suggest
this claim is very realistic. Less encouraging were the clear colour fringes
that could be seen under taxing conditions (both real-world and technical
testing) when the lens was used at short focal-length settings.

Image sharpness, however, was very good and peak resolution
was excellent. Between f/5.6 and f/11 the zoom achieved either better than or
close to 0.3 cycles-per-pixel but there was a clear decline thereafter and
wide-aperture performance at the 55mm setting was also disappointing. Image
distortion, on the other hand, was very well controlled right across the zoom
range. 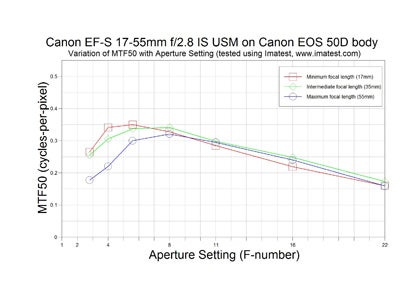 Peak resolution is good at all focal lengths but it is a
shame that wide-aperture performance at the 55mm setting was a little weak. Similarly,
at the other end of the aperture range sharpness also rolls-off through f/16
and beyond.