There has always been a good case for saying that optimum
performance is achieved when a lens is designed for one specific purpose:
versatile lenses are great for versatility but if you have a particular
application in mind then it is always best to seek out a lens that was designed
for that specific purpose. Canon’s 100mm f/2.8L IS USM prime is the perfect
example of a lens that does one thing very, very well indeed.

The 100mm focal-length is ideal for many types of everyday
macro-photography as it places a comfortable distance between the lens and the
object being recorded. It is also a focal-length that is easy to work with from
an optical-design point of view and the exceptional MTF results returned by
this lens are proof of the extent to which Canon’s designers have excelled in
this area.

The lens itself is rather large, with a barrel length of
123mm, but its handling is perfect. The focussing ring, which remains static in
AF mode but offers full-time manual intervention, is broad and ideally placed.
Three sliders to the rear control the focussing range, AF mode and IS system
while the focussed-distance window sits right at the front of the lens.

An equally generous, cylindrical type, lens hood is included
together with a soft carrying pouch. A tripod-mounting collar and extension
tubes are also available as optional extras.

Another benefit worthy of note is the way in which Canon has
addressed exposures for macro photography. There is a general rule that says
the maximum exposure time (shutter “speed”) for blur-free pictures is given by
the reciprocal of the focal length, which for a 100mm lens would be 1/100s.
That is fine for everyday photography but in close-up work, with a higher
magnification ratio, a smaller amount of blur is essential if the resulting
images are to look truly sharp. Sadly, under these very conditions the lens
projects a dimmer image on the focal plane, requiring an increase in exposure
that tends to lead to longer, rather than shorter, exposure times.

The traditional solution to this problem is for flash to be
used in a lot of macro-photography, not simply to illuminate the subject but also
to provide a brief burst of light that acts as an ultra-short exposure time. In
its new 100mm Macro lens, Canon has given photographers an additional helping-hand
in the form of image stabilisation that provides a two-stop reduction in
exposure time for macro-photography, rising to four stops in normal use.

Things are not quite so simple in the latter respect,
however, because image stabilisation systems typically reduce the sharpness of
pictures when the lens is supported on a tripod… and most macro-photography is
undertaken using tripod-mounted cameras. Although technical testing revealed a
slight drop in MTF when the IS was activated on a tripod, the resulting curve in
this case remained comfortably above 0.25 cycles-per-pixel from f/2.8 to f/22
and still sat above 0.4 cycles-per-pixel between f/4 and f/8.

Similarly, although there was just a hint of chromatic
aberration on the technical testing targets nothing showed up by way of colour
fringing in any of the real-world pictures (both large-scale and macro
subjects). 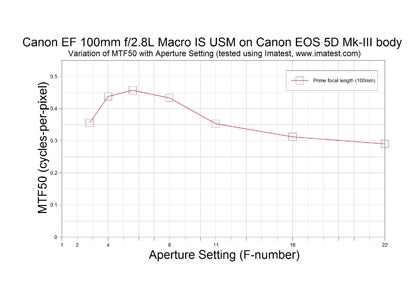 The MTF curve stays well above the critical 0.25
cycles-per-pixel threshold from wide-open to f/22 and peaks at a very
impressive 0.46 cycles-per-pixel.