Despite the hordes of press at the initial launch, we managed to lay our hands on one of two early samples to gain a better understanding of the Nikon Df‘s handling and performance. The first thing we noticed when the camera was passed to us was just how lightweight it feels in the hand, and coupled to the 50mm f/1.8 lens, it feels every bit as lightweight as you’d expect from a model that claims the title of being the smallest and lightest FX-camera to date. 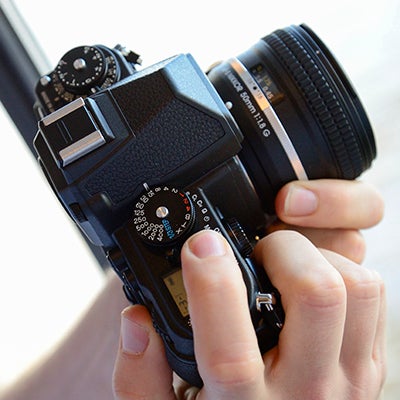 Although the Nikon Df has lightweight characteristics, it feels on par with Nikon’s high-end enthusiast and pro DSLRs in terms of the robustness, while no compromises feel as if they’ve been made in regard to the quality of the build either.

From the images of the Nikon Df it’s hard to get an impression of the actual size and it wasn’t until it was in our hands that we appreciated how much larger it is compared with what we’d originally expected. This is no bad news and with a bit more to wrap your hand around you can get a really solid grasp of the body. 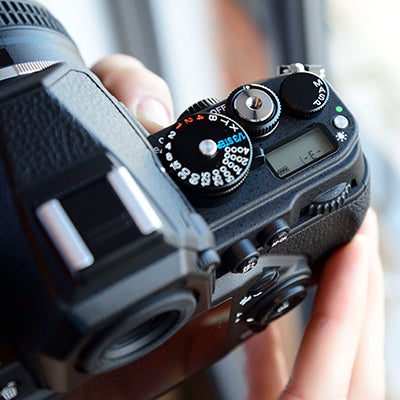 With a Nikon D610 in our bag and currently on test we held the two side-by-side to compare the dimensions. What struck us were the straight lines of the Df’s design, suggesting the designer used a pencil and ruler to create the angular look rather than drawing it freehand to produce a smooth and curvaceous appearance – something we’ve been so used to seeing on Nikon’s range of FX-format DSLRs over the years. 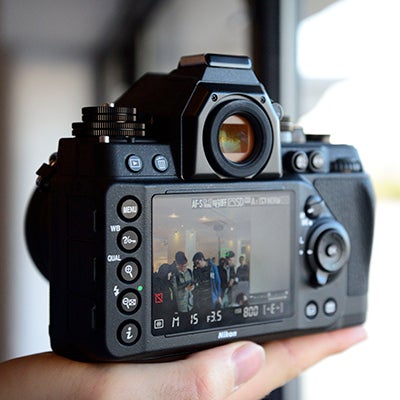 Our initial concerns of the command dial at the front of the body being difficult to access were quickly put to rest. Though it did take us a few moments to familiarize ourselves with its position, we quickly got used to using it, but being a couple of millimeters higher could have possibly improved operation – something we’ll find out when it comes to fully reviewing the camera. 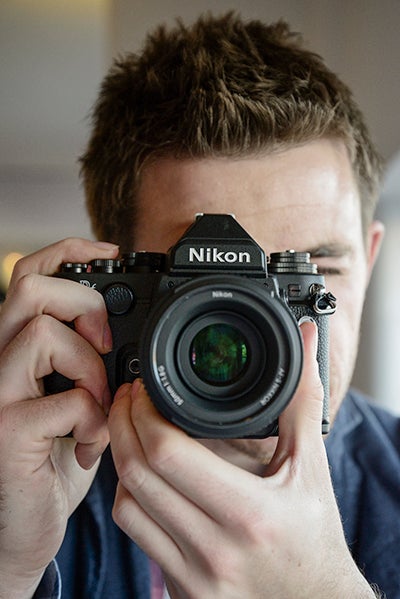 The mechanical noises as first demonstrated in Nikon’s pre-launch videos had us thinking it would be a noisy camera to use, but in truth it’s not. The shutter does make a reassuring mechanical clunk, but it’s not quite as loud as we’d expected. The noise of the mode dial, ISO and exposure compensation buttons turning was fairly quiet too.

As for button arrangement, it’s entirely different to any Nikon DSLR. There are buttons dotted about the body for everything you’d expect, but even for a regular Nikon DSLR user, it felt like a camera you’d really have to use in anger a few times before you’d feel comfortable with where everything is positioned.

As we’d expect from a 3in, 921k-dot screen, images on the rear display appeared sharp and vibrant, while the magnify buttons on the left of the body fall nicely to hand.   Given the option of black or chrome, we’d personally settle for black. The chrome finish pays homage to the traditional design, but somehow didn’t seem to have the same premium feel of our all-black sample. 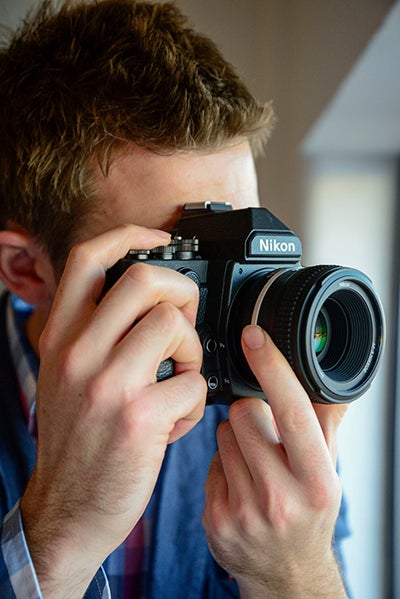 Initial impressions of the DF’s autofocus speed were as fast as we’d expect from Nikon’s Multi CAM 4800 AF module, however switched to Live View we did pick up on some early signs of hunting in relatively bright lighting conditions and a slower lock-on speed than some of the most recent DSLRs launched onto the market that feature dual pixel CMOS AF technology.

Our brief time with the camera didn’t allow us to couple the Nikon DF with different lenses, but with the 50mm f/1.8 lens attached it felt like a very well balanced combination. The magnesium alloy covers that are used to strengthen the top, rear and bottom of the camera give it the same water and drop-resistance as the D800/D800E.

We came away from the launch of the Nikon Df with mixed opinions. While there’s little to fault with its spec, features, handling and build quality, the high-price and way there are no plans for it to be sold body only were our main concerns.