The Canon EOS 700D’s AF performance is very solid. We found with the new STM lens attached, focus is very fast, zipping between either end of the focusing range very quickly, while focusing noise is almost completely silent. This is also regardless of what AF point is selected thanks to the 9 cross-type AF sensors, while AF point selection is pretty straightforward. That said, the AF points are stilled grouped relatively near the centre of the frame, while it can’t quite deliver when it comes to continuous subject-tracking AF. There just isn’t the coverage from the 9 AF points, while it doesn’t offer the same sophistication as that found in the Nikon D5200.

In Live View or video mode the combination of the Canon EOS 700D’s Hybrid AF and STM lens means focus is quick while also delivering pleasingly smooth transitions as you change the point of focus. Focus tracking is also possible during Live View, and provide your subject doesn’t move too erratically round the frame, general does a good job it maintain focus. 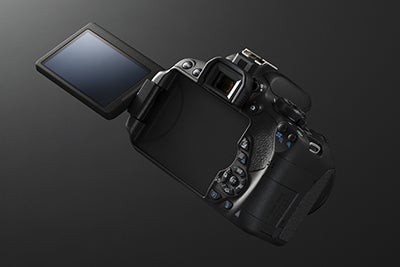 The Canon EOS 700D’s capacitative touchscreen offers a similar user experience to that you’ll have with a smartphone, with light touches and swipes all that are needed to make changes. This makes adjusting settings very easy, while even the smaller icons within the main menu are easy to select without demanding pinpoint precision.

When shooting in Live View, you can tap the point on the screen you wish to focus on, while the EOS 700D can be set-up to fire the shutter at the same time as you focus. When reviewing images, you can pinch-and-zoom in on the image, using your finger to zoom around the image with no evident lag. As we’ve experienced with both the EOS 650D and Canon EOS M the past though, its still not possible to double tap the image during playback to review it at 100% as most smartphones allow, while the image suffers from an ever-so slight delay before its rendered at full quality as you’re flicking through your images_pg_Inspire.Something you don’t experience when toggling through images when using the left or right buttons on the 4-way d-pad.

The screen itself renders the scene naturally in balanced lighting conditions, displaying good levels of contrast and saturation, while the wide viewing angle is a match for OLED rivals. 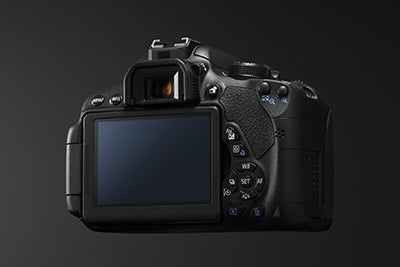 The way the Canon EOS 700D’s interface and controls have been designed, you don’t need to use the touchscreen at all if it doesn’t appeal, with the camera functioning just as happily without those finger gestures. Controls are well laid out, while the Quick menu display is particularly well designed, making toggling between settings very quick and easier. The main menu is split into 11 sub-menus that run along the top of the screen, and using the control wheel to quickly jump between each section.

The 700D is capable shooting at a burst speed of 5fps, which is comparable to the Nikon D5200, though is overshadowed by both the Sony Alpha 65 and Pentax K-30. This is maintained for only 6 Raw files before the buffer slows, while things are a little better when shooting JPEG only at 22 frames.

Long at video footage and the canon EOS 700D delivers highly detailed and smooth footage, while the built-in stereo mics manage to capture a good range through bass, middle and treble, though it can be susceptible to ambient noise in some situations.