The Panasonic Lumix TZ20 updates the incredibly popular Panasonic DMC-TZ10. Now with a a 16x optical zoom, Full HD video and even a 3D mode. Just how does the TZ20 weigh up? The What Digital Camera Panasonic DMC-TZ20 review finds out...

£349.00
The Panasonic Lumix TZ20 updates last year’s very successful Panasonic DMC-TZ10 and is a review sample we’ve been most looking forward to getting our hands on. The original Lumix TZ10 was a highly recommended long-zoom compact, offering the likes of GPS and HD movie recording with a 12x optical zoom. To this end it comes as no surprise that the successor, the TZ20, adds to the majority of those features but also makes some notable changes such as trading in the old 12x optical zoom for a new and all the more spangly 16x optical zoom.

Although the Lumix TZ20’s body shape hasn’t especially changed over its previous model, it’s what’s on the inside that’s interesting: gone is the 12.1MP CCD, now replaced by a newly-adopted 14.1MP MOS sensor.

The TZ20’s 16x optical zoom (24-384mm equiv.) lens offers Panasonic’s ‘Power’ Optical Image Stabilization (OIS) system, as per the TZ10, although on this occasion an ‘Active Mode’ has been added to minimise motion shake during movie recording. And speaking of movie capture, the TZ20 now offers AVCHD, as opposed to the previously utilised ‘AVCHD Lite’ of the TZ10.

This means Full HD 1080i recording is possible and, given the improvements of the new sensor, this should be much higher quality too. Zoom can also be employed while capturing, and continuous auto focus is also possible.

On the camera’s rear is a 3in, 460k-dot LCD screen that now has a touch panel for touchscreen control. Like the TZ10, the Lumix TZ20 also includes Global Positioning Satellite technology (GPS).

This allows for geotagging – i.e. metadata information to be tagged on to your images as ‘hidden’ data that records the location of where shots are taken. This can then be used for a variety of purpuses, such as cataloguing or interacting with websites to automatically place images on a mapped area, for example.

One major addition Panasonic has been grabbing the headlines with is the addition of 3D to many of its product lines. The TZ-series isn’t one to miss out, as the TZ20 now offers a mode that can be used much in much the same way as real time panorama capture. By physically moving the camera and capturing two separate images in one motion the TZ20 can compile this into a single MPO file for 3D playback on your 3D TV or 3D-capable device.

The time taken to process images and execute the 3D creation is surprisingly straightforward and quick, as long as the camera is moved in the desired direction rapidly enough (otherwise it won’t work!).

Like the TZ10, the Lumix TZ20 continues to offer full manual controls. The relatively DSLR-style of controls makes them easy to access and adjust. 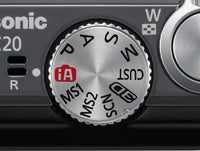 Similarly two My Scene modes are available to set up a personalised shooting mode – this allows for rapid switching between your favourite capture settings as opposed to trawling through menus.

Custom mode goes a step further, in that it can customise the ISO and a plethora of other settings for immediate access via three Custom menu options.

There’s also intelligent Auto (iA) mode that adapts to subject or lighting condition, taking on board the scene at hand and selecting the various options accordingly – a great option for the point-and-shoot user.