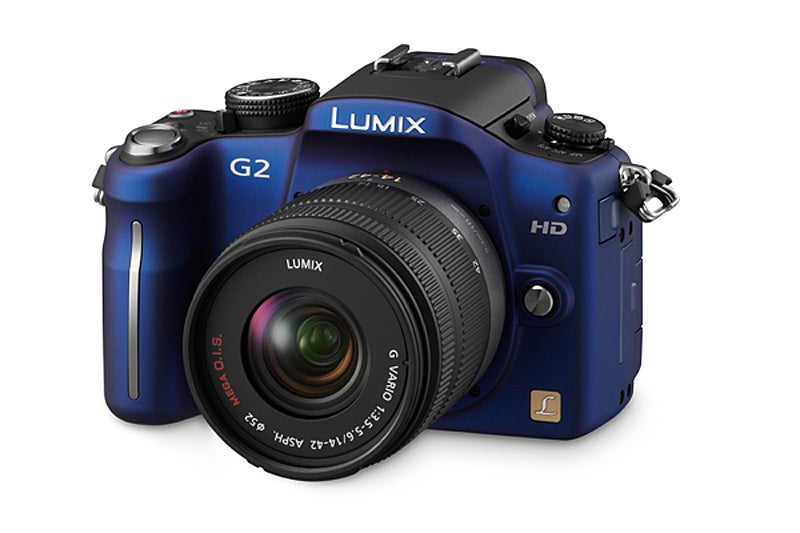 The Lumix G2 is the flagship release of the two models, building on the original G1 by adding movie capture functionality and introducing a touchscreen tilt-angle LCD for further enhanced use. It’s possible to access menus and control shooting all with the touch of a finger, including AF-subject tracking, assigning AF-points to be active or a simple one-touch focus. Manual focus assist has a 5x on-screen magnification option available – previously this would default to the centre portion of the screen, but with the G2’s touchscreen it’s possible to manually target a finger to where focus is desired and even drag to relocate. Other touches include the ability to click, drag and re-place the Histogram should it be in the way of a your shooting. A new touch-shutter feature works by touching the screen anywhere to fire the shutter. The G2’s touchscreen is highly responsive, though at this stage the firmware is version 0.2, so it’s highly likely some performance changes will be made.

The new Venus HD Engine II features in both models and promises better image quality and expands the previous G1’s top-end ISO 3200 sensitivity by a further stop to ISO 6400.
The Lumix G2’s inclusion of movie capture also features a one-touch quick button on the camera’s top. AVCHD Lite (720p at 50fps PAL or 60fps NTSC) and Motion-JPEG (30fps) capture are both possible, sitting the G2 below bigger brother GH1’s Full HD 1080p capabilities. The possibilities for movie capture are also further enhanced with the touchscreen as it’s no longer an essential to use the lens’s zoom ring which can cause camera shake when focusing. Instead the one-touch feature allows quick refocus during movie recording, adding to smoother, seamless use.

A new one-touch intelligent Auto (iA) button also features on both the Lumix G2 and G10, which lights up a fetching blue colour upon press to visually illustrate its activation. This new addition will see step-up or first time users able to quickly access automated scene modes and let the camera do the work, with another quick press setting the camera back into user-command, as per the current mode on the mode dial.

Intelligent Resolution Technology, an intelligent smart sharpen feature as seen recently introduced in Panasonic compacts such as the TZ10, also features. This mode, when active, is essentially an intelligent sharpening mode that assesses and identifies gradient and contrast areas individually and ensures optimum sharpening for a more-refined, detailed finish (particularly prominent when using digital zoom).

Compared to the G1, the Panasonic G2 looks similar, bar the rejigging of some buttons and mode placements. The autofocus modes no longer sit on the left-hand top dial, instead this dial now controls metering options (face detection, subject tracking, multi-point and single-point spot) with the AF-modes (AFS, AFC and MF) on a switch-ring to the outside. The Q-Menu button of the G1 is replaced by the one-touch movie button of the G2, and instead moves to the rear of the camera’s body.

The G10 is a similar model to the G2, but it lacks the touchscreen functionality and the 460K-dot LCD is not tilt-angle capable. Furthermore there is no one-touch movie button and movie capture is limited to the Motion-JPEG type.

Both models will ship with a new 14-42mm f/3.5-5.6 Mega OIS lens, similar to the original 14-45mm lens, albeit without the switch for optical stabilisation on the lens itself and of a different construction. Samples were not available at this stage for assessment.

So what are the key differences between the Panasonic Lumix G1, G2 and G10? Our essential specifications table shows each option side by side: