After much hype and rumor, Canon has announced its first ever Compact System Camera - the Canon EOS M

Speculation as to whether Canon may or may not release a Compact System Camera has finally ended with the announcement of the EOS M – the company’s first foray into the mirrorless market. Slotting into the gap between Canon’s PowerShot range of compacts and its line of DSLRs, the Canon EOS M is a new system that benefits from a smaller lens mount that Canon have branded EF-M.

On first glance the Canon EOS M’s styling and design looks like it has taken inspiration from Canon’s PowerShot models, however as you delve beneath the surface it becomes clear it shares similar innards to the recently announced EOS 650D. It features, for example, the same 18MP resolution and Canon’s DIGIC 5 image processor, as well as the an identical ISO range that runs from 100-12,800, expandable to an ISO equivalent of 25,600. 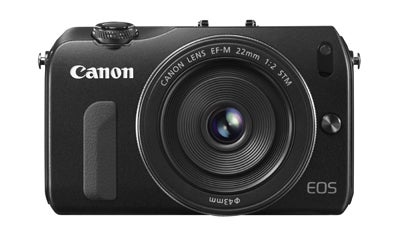 Boasting a new 31-point Hybrid AF system, the Canon EOS M provides a combination of contrast- and phase-detection AF. The idea behind this is to enhance AF speed and accuracy, with the phase-detection AF being used initially before the contrast-detect system takes over to fine-tune focusing. The key advantage of this is that it enables continuous focusing when recording HD video – a feature that Canon DSLRs have lacked in the past, but have begun to offer with the most recent EOS 650D. 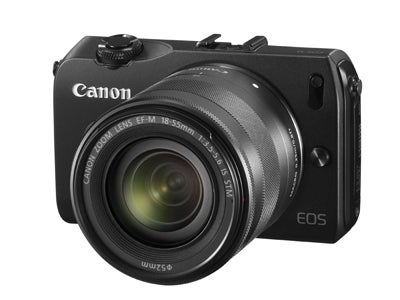 There’s a wide selection of AF modes to choose from including Face Detection and tracking, FlexiZone-Multi and FlexiZone-Single, as well as Touch AF. Again, as with the EOS 650D, the Canon EOS M features a 3in Clear View LCD II touchscreen that allows you to touch the display to pinpoint focus and fire the shutter. Featuring an impressive 1040k-dot resolution, the display also supports a multitude of touch gestures for zooming and scrolling through images in playback mode.

There’s real-time metering from the image sensor and four metering modes: evaluative, partial, spot and centre-weighted. The camera goes on the offer full-resolution images at a maximum continuous speed of 4.2fps. Full HD video (1920×1080) is captured at a variety of frame rates that include 30, 25, 24fps, with the option of 60fps and 50fps recording at 720p resolution. 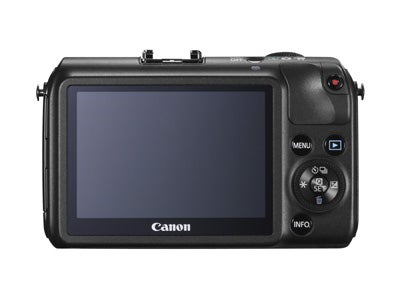 Moviemakers will also appreciate the 3.5mm stereo port for plugging in an external microphone and the Video Snapshot feature that gives users the chance to capture short video clips before stitching them together in camera to create fast-paced movie sequences. Unlike many recent releases wi-fi functionality isn’t offered, but there’s a good range of Creative Filters that include miniature, fisheye and toy camera effects. 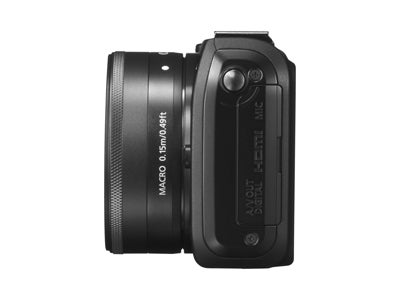 The body itself doesn’t feature a pop-up flash – instead Canon will ship the camera with a newly designed Speedlite 90EX flash unit. Not forgetting exisiting customers, the Canon EOS M has been made to be fully compatible with the full range of digital EX Speedlite units. Additionally, an optional EF-EOS M mount adapter will allow owners of the EOS M to attach any EF-S or EF lenses that they may already own. 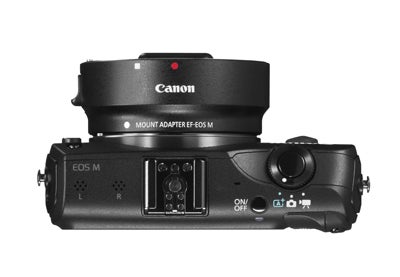 With the arrival of the EOS M comes an all-new Canon EF-M mount, which is physically smaller than the well established EF and EF-S mounts. Two dedicated lenses have been released for the EOS M system so far: the EF-M 22mm f/2 STM pancake lens (equivalent to 35.2mm in 35mm terms) and the EF-M 18-55mm f/3.5-5.6 IS STM lens (equivalent to 28.8-88mm in 35mm terms). Both feature Canon’s Stepper Motor Technology (STM) to provide smooth and quiet focusing, making them ideal for HD video capture.