We've laid hands on the Canon EOS 6D. Read our initial thoughts and opinions from our hands on preview of the Canon 6D below...

Minutes after announcing the Canon EOS 6D to the photo press at Photokina 2012, we managed to lay hands on a pre-production sample of the Canon 6D, Canon’s lightest and most affordable full-frame DSLR to date.

Given the opportunity to handle and operate the Canon 6D for 30 minutes, we’ve prepared this first look, hands-on preview that describes our initial thoughts and impressions of the build, performance and handling. 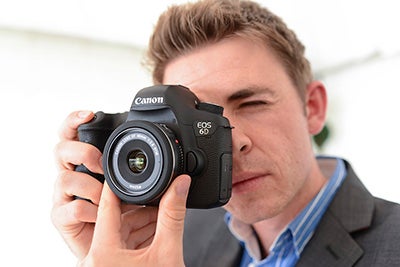 Getting a good grasp of the camera reveals how well sculpted the grip is and though it may not share the beefy and muscular feel of the EOS 5D Mark III, it’s comfortable to hold and reasonably solid too.

At the launch Canon presented a dissected body of a Canon 6D, providing a better understanding of what lies beneath the surface. As one might expect for an enthusiast model it features a magnesium metal front and rear cover construction.

If we could describe the build in any way we’d say it’s a blend of the EOS 5D Mark III and the EOS 60D bodies, with similar dimensions of the latter. 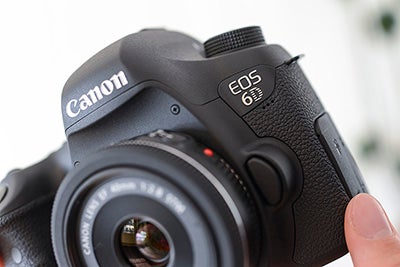 The scroll dial at the rear of the camera is smaller on the Canon 6D than on more advanced EOS full-frame models and this leaves quite a lot of free space beside the 3inch, 1,040,000-dot Clear View II LCD screen.

Interestingly, Canon opted to keep the Canon 6D with a fixed screen rather than a Vari-angle type and our first impressions of it are very complimentary. 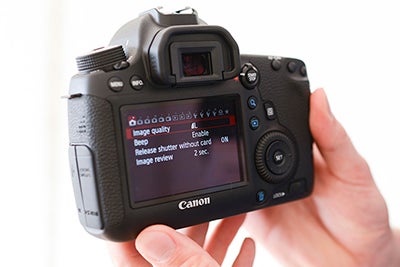 Comparing the back view of the Canon 6D to the 5D Mk III, it’s the Canon 6D that has the more spacious layout, but importantly it doesn’t loose any important buttons, with all the controls you need to quickly activate Live View and record HD video.

The mode dial features its own lock – a feature we’ve become accustomed to seeing on most Canon EOS DSLR’s since the 5D Mark II. There’s no dedicated rate button however so this has to be done through the menu instead.

Canon 6D in use

Shooting a few frames overlooking Cologne and reviewing them on the back of the camera revealed a bright and sharp image. Also, rather than using your left hand to zoom into an image like you do on the EOS 5D Mark III, the zoom button is located on the right side of the camera which we much prefer. 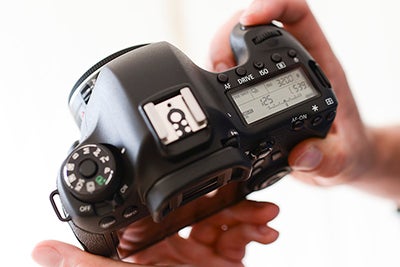 The 11-point AF system might not be as complex at the 5D Mark III’s 61-point offering, however initial impressions of its speed and accuracy during our brief hands on were excellent.

AF points are illuminated in red as you compose and half depress the shutter button and it locked on and offered a reassuring AF beep very quickly. It’s worth bearing in mind though that the AF system only features one cross type point in the centre and when you compare it to Nikon’s D600 and its AF system, the latter offers better frame coverage.

The Canon 6D sounds very similar to the 5D Mark III when it’s being fired, albeit slower by 1.5fps.

Other points to note were the slight changes to menu system. The icons at the top appear slightly smaller and there seems more of them.

Navigating the menu of the Canon 6D is extremely quick thanks to the dpad sitting within the scroll dial – a great design that’s intuative to use, especially when we were moving the AF point through the frame. 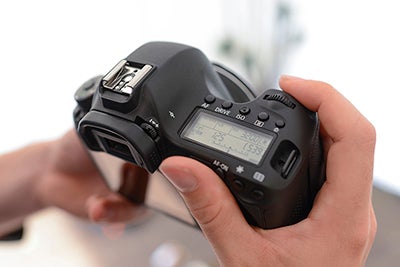 With an asking price of £1799 it feels like you’re getting a lot of camera for your money with the Canon EOS 6D.

Users who have been thinking of upgrading to a full-frame model have never had it so good and with Nikon’s D600 arriving at the office two days ago we couldn’t resist taking a few side-by-side comparison photographs.

We’re in the process of currently testing the Nikon D600, however we’re going to have to be patient and wait until December before we put this pair up against each other in a head-to-head test.