Whether it’s inside your lenses, on your sensor or just part of your camera’s firmware, the likelihood is that your camera has some form of image stabilisation. However it works the end goal is the same: to help maintain sharpness at slower shutter speed, that would be otherwise lost through camera shake.

Of course, loss of sharpness can also be caused by a range of other things: subject movement, poor-quality optics or issues with a camera’s focusing system are just three. Some situations will be beyond the capabilities of any image stabilisation system, but used in the right environments such systems make a significant difference. Before we look at these situations, let’s examine the principles behind such systems.

What is image stabilisation?

The term ‘image stabilisation’ refers to a collection of technologies designed to help maintain sharpness in images and video. There are three main ways this is achieved in stills cameras: by shifting elements inside the lens, moving the sensor or through an adjustment to the camera’s sensitivity. There are other lesser-used systems designed for the same purpose, although these are used most widely.

The first of these, lens-based image stabilisation, predates commercially available digital cameras, having been used in lenses designed for film SLR cameras, as well as binoculars, video cameras and other devices. Today, such systems are commonly used in DSLR and CSC lenses, as well as in the lenses of compact cameras.

This system works by moving dedicated elements inside the lens in the direction opposite to the movement of the camera. The direction and degree of shift is calculated by gyro sensors inside the lens, which feed their calculations to a microcomputer, which in turn instructs the image-stabilising lens group. This shift offsets the movement of the camera which would otherwise cause blur, and the result is a sharper image.

Aside from its image-stabilising properties, the major advantage of lens-based image stabilisation is that its effects are visible through an optical viewfinder, which makes accurate composition far easier. Although such systems are now incorporated into lenses of many focal lengths, it’s particularly beneficial at longer focal lengths where only a small amount of camera movement is needed to shift composition entirely.

Canon and Nikon have both claimed that by having the system inside the lens rather than the body, each stabilising system can be tailored to the specific lens in which it is included. The disadvantage of lens-based IS, however, is the premium that it adds to a lens’s asking price.

Sensor-based image stabilisation works on a similar principle to lens-based systems, only it’s the sensor, rather than the lens elements, which moves to counter any motion. The sensor is mounted on a moveable platform, and, as with lens-based systems, gyro sensors determine the speed and direction of movement. Once the calculations have been made, the sensor moves to counter any blur that would otherwise form.

The advantage of this system is that it can be used with a range of lenses, including those from other systems. The disadvantage, if manufacturers of lens-based systems are to be believed, is that such an all-encompassing solution isn’t as effective as one designed to suit a specific lens. Either way, both systems have been shown to be effective.

This works quite simply: the camera’s sensitivity (ISO) is adjusted to a point where the shutter speed is deemed fast enough to produce sharp image.
This system is attractive to a manufacturer as, unlike the previous two systems, it simply needs to be programmed into the camera’s firmware. There are, therefore, no additional costs, nor mechanical considerations. The downside is that raising the camera’s sensitivity produces more image noise, thus degrading image quality.

On at all times?

Manufacturers recommend that image stabilisation systems should be turned off when using a tripod, as, in the absence of hand-oriented shake, such systems may attempt to correct for vibrations they cause themselves. With more recent optics, however, it hasn’t always been necessary to do so as many now incorporate methods of detecting when a camera is placed on a tripod (automatically disabling such systems). This isn’t always explicity stated within the specifications of many lenses, so it’s best to check the manual (if you have one), as recommendations for that specific lens are likely to be detailed here.

What kind of difference does it make? 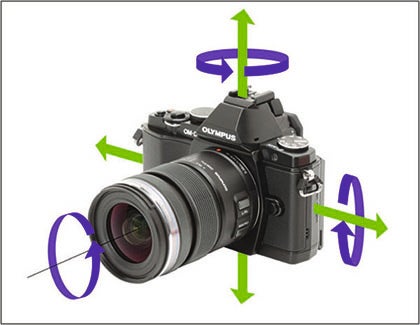 (ABOVE: The system found inside the Olympus OM-D EM-5 provided stabilisation over five separate axes)

Testing has shown lens- and sensor-based image stabilisation systems to have different effects in different situations. For example, such systems are more effective when a subject is further away than when it is closer to the camera. The reason for this is that, as a subject further away will occupy less of the frame than if it were close up, the same amount of camera shake in each scenario will produce different amounts of displacement on the sensor.

Furthermore, with the subject occupying less of the frame when further away, its details cannot be scrutinised to the same level as if it were captured close-up.

The resolution of a camera’s sensor will also have an effect; at a constant resolution (such as 300ppi), a sensor with more pixels will produce an image with larger dimensions, which in turn means that smaller levels of blur are more likely to be noticed. Of course, what’s deemed as ‘acceptably sharp’ is subject to a range of factors, such as the size at which an image is ultimately viewed and the nature of the subject itself.

There are a number of alternatives to image stabilisation, should your camera or lens not offer such a facility:

* The use of a tripod isn’t always practical, but for longer exposures it’s pretty much essential. In those situations where it can’t be used, a monopod, Gorrillapod or another small-format alternative can be all that’s needed to make the difference.

* Almost all cameras offer a self-timer facility which delays the exposure for a few seconds to minimise any blur from tripping the shutter release button. This can be effective even when using a support such as a tripod.

* Some DSLRs offer a mirror-lock option which swings the mirror up in a separate action from the shutter being opened, which also helps to keep the camera stable during the exposure.

* Remote releases, whether wired or wireless, also allow the shutter to be fired without the camera being physically touched, and are vital when capturing bulb exposures (those longer than camera usually allows).

* Pay attention to the camera settings you’re using to see whether they’re appropriate. If you can use a faster shutter speed, or a wider aperture which will increase the shutter speed depending on the mode in which you’re shooting, this may help. Raising your camera’s sensitivity will introduce more noise, but sometimes this is required to keep the shutter speed high enough.