Picture-taking has become such an automated process that it is sometimes useful to pause and think about the reasons why we do certain things, such as stopping-down a lens to give a smaller aperture... 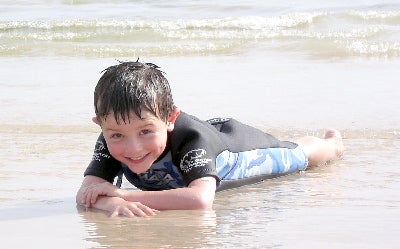 The primary interest in this picture is the boy’s face, which has to be fully sharp: the background only needs to be sufficiently clear to be identifiable and that could have been achieved using almost any lens and aperture setting. Photograph (c) Jon Tarrant.

When aperture values are set automatically it is normally only the first factor that is taken into account – and I mentioned this in my first WDC ‘blog, lamenting the fact that this represents a gross under-utilisation of the processing power that is contained within the modern digital cameras and lenses.

The second factor is likely to be the second-most-common aspect that is taken into account in general and probably the top priority for well-informed photographers. If I’m honest this is usually my own top priority, with just a nodding glance towards the third factor in the sense that I’ll try to avoid setting really small apertures if at all possible.

And yet when I write lens reports, and when you read them, there is a strong emphasis placed on the MTF curves, which relate only the last factor in the list above. Why is this?

The answer is that for a long time it was safe to assumethat almost every lens had an “aerofoil” sharpness curve that indicated a quick improvement in quality as the lens was closed down two or three stops then a gradual decline thereafter. In short, to get the best results you had only to set an aperture two or three F-stops down and you could then be pretty confident that all would be well.

Zoom lenses changed that (for the worse) as have more modern approaches to lens design (for the better). Knowing the best aperture to set has become really difficult – and that’s why I’m going to keep harping on about manufacturers using the data that they surely must have to skew their auto-exposure programs towards optimum-quality settings.

Alternatively, you could choose to buy a lens that delivers at least 0.25 cycles-per-pixel right across its aperture range. Such lenses are easy to spot in my What Digital Camera lens tests because they score 20/20 and that list currently comprises only four lenses;

As a result, these are my suggestions for a carefree photographic life. It really doesn’t matter what aperture you set with any of these three lenses because they have no identifiable weaknesses when it comes to MTF performance. There are other lenses that get close to 20/20 for image quality and the ones listed above may not be the highest scoring lenses overall, given that there is more to evaluating a lens than simply pointing it at an MTF chart for a day, but these are the current rulers of the aperture domain.