Proving you don't need expensive studio lights, conceptual photographer Chad Coombs talks us through two innovative images of his that are lit with nothing more than pocket torche

Canadian photographer Chad Coombs is probably best known for his thought-provoking conceptual photography. Indeed, his junk food homage to Jesus‚ last supper the aptly entitled ‘Fast Supper’  has already featured in the pages of WDC (Oct 2007) where it was named as a personal favourite of our resident Photoshop guru Martin Evening.
While many of Chad’s images are deliberately created to provoke a response and to stimulate (often heated) discussion about their underlying themes, there’s no denying the technical innovation that Chad employs when creating them,  it’s part of what sets him apart from so many of his peers. Take these three stunning images, for example. The two black & white portraits could almost be stills from a film noir movie, and while the subject looks like she’s located 15 floors up in a dingy Manhattan apartment block, the shot actually uses a couple of flashlights and a blind to create the effect, and could have been taken virtually anywhere.
The light-painted model in the other image is another triumph of imagination over costly equipment, with Chad employing a number of props and a simple torch to produce a beguiling image.  Thankfully, we’ve managed to persuade Chad to reveal his technique and the equipment he uses. Why not have a go at using torches to illuminate your subjects, or painting with light yourself? 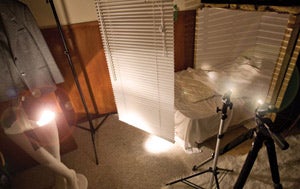 The Set Up
The image above shows how Chad lit the two black & white portraits shown on these pages. Two torches were positioned so that one lit the model from the side while the other was shone through a blind to create the effect of light, be it natural or neon coming from outside the building.
As Chad explains, this set up is something he learnt at an early age, and can be achieved with small pocket torches. ‘I started out with torches before I could afford flashguns or strobes, but now that I have them I still use my flashguns as if they were torches!’

‘All but one of the torches I use are small, pocket-sized ones. They allow you to be more specific with your lighting and are easy to tape to anything.’

In additon, Chad positions the two torches so that the direction of their beams work in harmony. ‘I always have one torch specifically for the face and another for the body at a more angled perspective,’ he says. ‘These brighten up the face and body to stand out from the shadows created by the other flashlight on the opposite side of the blinds hanging from my background stand’.

‘If you play with the angle and distance you can alter the shadows created by the blinds quite a bit. In these photos I do not move the flashlights, and the model isn’t allowed to move either 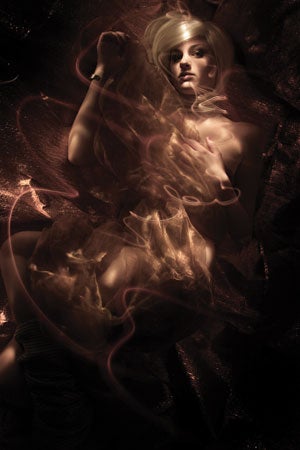 Painting with Torchlight
In addition to using torches to light a subject, Chad has also experimented with light painting, using torches in a darkened room  and a long exposure to ‘paint’  his subject with light. Although the technique can produce a dramatic effect, it’s not all that difficult to set up and execute, as Chad explains: ‘Photography is an amazing thing and you are only limited by your creativity, not your gear,’ he begins. ‘For this shot, I laid down a copper backdrop and draped a transparent fabric around the model, who was lying on her back. I had the studio in complete blackness with my camera set to bulb at f/11.’

‘When the shutter was pressed I used one of the torches to paint the model, ensuring that I moved the flashlight around her smoothly. My distance depended on the desired area I wanted to light up.  I always play with the angles jumping from side to side of the model while painting.’

‘After I had finished lighting the model and area, I turned the flashlight around facing the camera but covered the light source with my thumb to give it a glowing red look. I then waved it around much like an interpretive dancer does with a ribbon. Afterwards I released the camera from bulb via the remote cable and awaited the final image to appear on the screen.’

‘My light painted images are never post-processed, I leave them exactly as they come out of the camera. The flashlights in this photo are the same ones I have use for every light painting portrait.’
‘Of all the torches I use, the Lowepro is my favourite as it has the warmest and smoothest tone. White balance changes with different torch bulbs, and you need to be aware of this otherwise it can cause all kinds of problems!’

Chad had a fan blowing to give the fabric a milky look due to its movement
A few simple props and a couple of torches, and you could be making creative images like this