There are times when video may be a better choice than a still photo, and many cameras have a movie mode for these occasions 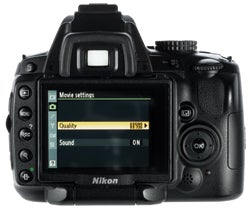 Almost all compact cameras, and an increasing number of digital SLRs, offer the ability to shoot movie clips.

While suffering some limitations compared with a dedicated camcorder, it’s possible to get some great results if you know these limitations and follow a few simple guidelines.

Before you start shooting movies on your still camera it’s important to know what your camera cannot do.

First, with most still cameras the length of clip you can shoot in one continuous take is limited to anywhere between five minutes and 30 minutes, depending on the camera and selected resolution. So shooting the whole of the school nativity play in one take is out.

In practice this isn’t a big issue because most films are composed of a series of shorter clips edited together. A single  30-minute clip would be tedious to watch.

Second, many cameras have only a built-in microphone with no means to add an external one.

Built-in mics are omni-directional and pick up the sounds you want as well as those you don’t – such as the sound of your lens’s AF motor focusing. If you’re videoing someone talking, set the lens to wideangle and get as close as possible so the mic picks up as much of their voice as possible.

If your DSLR does offer auto focusing in video mode (not all do), switch to manual focus to eliminate the motor noise.

If your camera does have the ability to add an external mic, you’ll find you get significantly better audio quality from one.

Most cameras offer no control over aperture and exposure settings during recording – you’ll have to set the aperture before you start and let the camera adjust exposure itself, by varying the ISO. Many compacts will not let you zoom during recording. 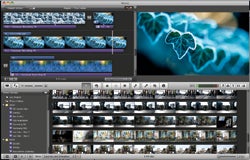 To get the best from all those movie clips you’ll need to edit them together, and for that you’ll need dedicated video- editing software.

Chances are you’ve already got Windows Movie Maker on your PC, or iMovie if you have an Apple Mac. If not, there are several inexpensive applications available. Editing will enable you to remove unwanted sections, add transitions, graphics, music and voice-overs. 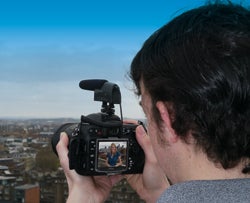 Support the camera in some way. Holding the camera at arm’s length to shoot using the LCD screen is not conducive to steady pictures.

A tripod, monopod or some kind of shoulder brace will give you less shaky shots, especially when you zoom.

Even if your camera can autofocus in movie mode it’s often best to switch to manual anyway.

Motor noise aside, this avoids the lens ‘hunting’ (drifting in and out of focus) during recording as it tries to find and lock on to your subject. This can look amateurish.

Don’t pan aimlessly. In general it’s best to keep the camera fairly static and keep zooming and panning to a minimum, using only when necessary and certainly not on every clip.

When you do pan, know where you’re going from and to; don’t let the camera meander aimlessly. Keep zoom movements slow and as smooth as possible (unless you want a deliberate jarring effect). It will take some practice to be able to turn a DSLR’s zoom ring smoothly without jerking.

Keep clips brief. A video will be more interesting when it’s made from a series of shorter clips from different angles and positions, rather than if it’s made from fewer long clips. This involves some pre-visualisation of the finished, edited video at the shooting stage.