Why is some light transmitted and some light reflected at a glass surface? This is a surprisingly difficult question to answer because the nature of reflected light is not as simple as you might think. 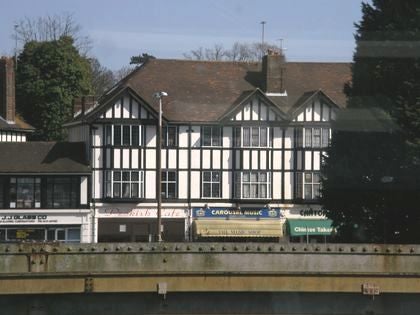 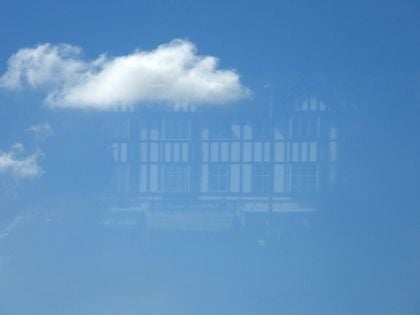 Look at the two pictures shown above. They were taken inside a train looking out of opposite windows. In one picture the scene outside the window is clearly visible; in the other there is a blue sky outside but also a reflected image of the view from the opposite window. What is going on here?

If you look closely at the first image you will see that it too is overlaid with a reflected image of some sort but the nature of that image cannot be clearly discerned. So both windows exhibit reflected images and also transmit images from outside into the train carriage. Assuming that the outside views are of primary interest it is clear that in both cases the reflected images simply degrade the two scenes.

The same can happen inside a lens, where light strikes multiple glass surfaces and is both reflected and transmitted. Here, however, light that is reflected from the back of one element can strike the front of another element and be reflected back again towards the first element, where some of this light is transmitted and some of it is reflected back yet again. The effect is not dissimilar to standing inside an elevator that has mirrors on opposite walls and generates an “infinite” series of disappearing images.

Occasionally this effect is visible in captured pictures but that is rarely the case nowadays thanks to sophisticated anti-reflection coatings that are applied to modern lenses. It is important to realise, however, that there is a huge difference between preventing reflections from occurring and simply stopping reflected light from generating any visible effects. If light is reflected, even if the reflections are not visible, then less light remains to travel through the lens.

This is an important consideration that can undermine simplistic thoughts about the variation of illumination intensity via mechanical apertures. In other words, two lenses that both have a maximum aperture of f/4, for example, may actually produce a different level of image brightness simply because one has a higher transmission factor than the other. Technically this is known as transmittance, and it is for the benefit of their maximised transmittance that some Carl Zeiss lenses are designated as T*.

Some example figures are quoted in Sidney Ray’s excellent book Applied Photographic Optics (Focal Press); “A four-element f/3.5 Zeiss Tessar with six air-glass surfaces and one cemented surface… gave a total transmittance of 0.66, a loss of 34%”. Of course part of this loss is due to absorption of light within the glass itself and, as a rough guide, the loss due to reflection alone is approximated by 1-(0.95^n) where n is the number of air/glass surfaces. For the six-surface Tessar above, this calculation suggests that 26% (of the 34% total loss) is due to reflections.

That’s a lot of reflected light – and this explains both the importance of anti-reflection coatings and the reason why it’s so easy to see reflected images in windows! Who would have thought that a simple train journey could lead to such deep contemplations?

Picture Caption: Views seen through opposite windows looking out from inside a train. See text for details. Photographs (c) Jon Tarrant.