Having set the scene with various technical definitions and explanations we are now ready to consider how best to compare the performances of pro-spec and consumer lenses.

Sigma manufactures a vast range of very impressive and competitively priced lenses, including both pro-spec and consumer designs. One of the questions that often crops-up is how much better are professional lenses than consumer lenses – and that is the question that we will attempt to answer here.


Bearing in mind that the 18-250mm has a field-of-view that is equivalent that offered by a 24-375mm zoom on a full-frame camera, there is almost no contest as this stage: the 18-250mm lens is little more than 20% of the price of the two pro-spec lenses that cover only about half the same focal-length range and is also only around 30% of their combined mass.

But what about image quality? Surely that is where the differences really show between pro-spec and consumer lenses! Well it rather depends on how you assess image quality…

The usual way of reporting image quality in What Digital Camera’s reviews is to plot MTF50 in cycles-per-pixel across the aperture range at a selection of different focal-length settings: what happens if we reverse the parameters and choose a typical aperture, say f/8, then look at how the MTF50 value varies with focal length? Interestingly, as the graph above shows, the consumer lens comes out on top!

The problem here is the fact that this measure is looking at how the sensor and the lens work in combination – and at the same time fails to take account of the number of pixels available to define the picture.

Bearing in mind that the D80 used to test the consumer lens comprises 3872 x 2592 pixels whereas the D700 used to test the pro-spec lenses has 4256 x 2832, it is clear that the D700 has a higher pixel count. So even if its pixels are used less efficiently, the D700 may be able to squeeze more detail out of the pro-spec lenses than the D80 can from the consumer lenses. And that is precisely what the line-widths-per-picture metric reveals, as seen in the graph below. 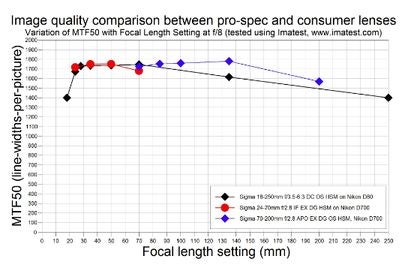 When converted to line-widths-per-picture the order of the lens curves swaps over and the pro-spec lenses triumph over the consumer lens. There is no option for the consumer lens to take advantage of the D700’s higher pixel count because it does not have a big enough image field to cover the full-frame sensor.

In many ways this result poses more questions than it answers as it appears to undermine the entire basis on which WDC’s lens tests are evaluated. In fact that is not the case because the cycles-per-pixel measure still indicates the relative quality of each lens tested on the same camera body – which is the very reason why the graphs are always titled with the camera body used. Better still, in the case of Canon, Nikon, Pentax and Olympus the very same dSLR body is used for most tests so the comparability of WDC’s results is very high indeed.

Nevertheless, all lens tests should be accompanied by ahealth warning that specifies the parameters used – and any review that discusses only the lens itself without noting the host camera body is of very limited significance indeed.

Returning to the question set at the start of this ‘blog, in the case of the comparison examined here it is clear that Sigma’s consumer zoom is a very attractive alternative to the pair of pro-spec lenses on a number of counts. But it isn’t better – and when handling is taken into account its lack of internal focussing adds to the obvious disadvantage of a significantly restricted maximum aperture, especially at longer focal-length settings.

That said, if it were my money and my back that I didn’t want to overload by carrying heavy kit on an extended trek, I would be very tempted to live with the consumer zoom’s limitations. And if anybody queried the image quality issue, I would take comfort in the fact that no matter which metric is chosen the more affordable lens is never more than a hair’s breadth behind its costlier cousins.