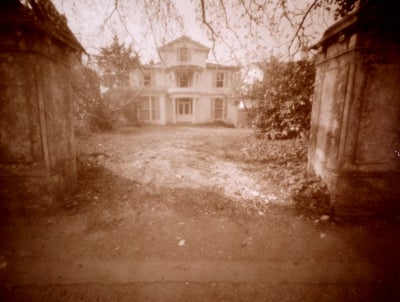 There are various Internet references to the optimum pinhole size for non-lens photography but not many technical derivations of pinhole diameters. A particularly nice reference is Jon Grepstad’s overview at http://photo.net/pinhole/pinhole.htm, which points to Bruce Barrett’s collection of formulae at http://www.brucebarrett.com/Pinhole/PinholeEverything.txt. It is somewhat surprising to see that the formulae vary, given that the laws of Physics are fixed, but this is sometimes due to nothing more mysterious than the use of different measurement scales. Nevertheless, I’m going to offer my own optimum pinhole derivation for others to criticise or support however they see fit – provided that all such comments are accompanied with refinements to the underlying Physics!

I’m going to assume that the optimum pinhole will be used to image an object that is finite in size and located at an intermediate distance: more specifically, I’m going to assume that the light coming from each point on the object travels as an effectively parallel beam of light after passing through the optimum pinhole. Or rather, it would do so if there were no diffraction.

Diffraction is the effect that causes images to become less sharp as the aperture size is decreased. Diffraction changes the image of a circular hole from a bright spot (which is what would be expected) into a diffuse disc (which is harder to explain) surrounded by a series of rings (which are even more surprising but still explicable). Readers who want more detail about this should consult the excellent HyperPhysics website at http://hyperphysics.phy-astr.gsu.edu/HBASE/phyopt/cirapp2.html#c2.

Given that the numerator on the far right of the equation comprises constant terms (for a given camera) we can see that the diameter of the diffuse spot is inversely related to the pinhole diameter. Recall also that without diffraction I’m assuming that the bright spot on a screen caused by a given point on the object will be the same size as the pinhole diameter.

All of this suggests a critical condition for the optimum pinhole where 2a = d (the diameter of the diffuse spot is the same size as the bright spot that would be projected if there were no diffraction). If the pinhole were made smaller than this then the diffuse spot would get bigger and if the pinhole were made larger then the bright spot would get bigger. So let’s put 2a = d back into the original equation to get the critical condition, which is d = 2.44λD/d. This in turn can be arranged and simplified to get d = sqrt(2.44λD), where sqrt is shorthand for square-root.

We can make an assumption about the wavelength of light (and if necessary we can put a filter behind the pinhole to realise our assumption) and set a typical wavelength, based on green light of 510nm (taken from NASA’s Atmospheric Science Data Centre http://eosweb.larc.nasa.gov/EDDOCS/Wavelengths_for_Colors.html).
For convenience, we would be better off working in millimetres than in SI units, so let’s use a wavelength of 0.00051mm then substitute this into our equation and simplify again to get: d = 0.0353 sqrt(D).

Now we can plug in some values for D based on the lens-flange-to-sensor distances for digital cameras to obtain values for the optimum pinhole that should be used in each of these situations. There is a good table of distances for film-based cameras at http://www.graphics.cornell.edu/~westin/misc/mounts-by-register.html, which includes the 46.5mm distance that is used by Nikon. Plugging this value into our equation gives an optimum pinhole diameter of 0.24mm. Another table, on Wikipedia at http://en.wikipedia.org/wiki/Lens_mount, gives a distance of 20mm for Micro Four Thirds cameras, equating to an optimum pinhole diameter of 0.16mm.

All that needs to be done now is to test the theory in practice. Needless to say, this is a topic to which I will return in due course.