Trying to evaluate the sharpness of macro lenses at macro reproduction ratios is tricky. Here is a quick look at the nature of the problem u2013 and the real-world performance of Pentaxu2019s weather-resistant full-frame D-FA 100mm f/2.8 Macro WR lens.

For consistency, macro lenses are tested in the same way as all other lenses for WDC’s lens reviews without any special regard being given for their macro capabilities. This is clearly not ideal but it does allow different lenses to be compared on a more-or-less level playing field. Nevertheless, I am constantly trying to find ways to reflect the particular characteristics of specific types of lenses better – and in this short article I want to explain some of my latest efforts in the macro area based on Pentax’s very impressive 100mm f/2.8 Macro WR lens (which will be reviewed in WDC very shortly).

The MTF figures that are reported in WDC’s reviews are generated using an Imatest target that measures approximately 75 x 50 cm and pictures are taken so that the target fills the sensor area. This means the reproduction ratio varies with the camera format but remains constant (regardless of lens focal length) for any given sensor size. Typical reproduction ratios in this situation are around 1/20th life-size for full-frame sensors and 1/30th life-size for APS-C sensors. These ratios correspond pretty well with the sorts of distances that are used for portraiture (although few people would choose to use an ultra-wide-angle lens for portraiture under those sorts of conditions) but they are clearly nothing like macro reproduction ratios.

Getting in closer to do macro pictures of the test targets is problematic for two reasons: firstly, the targets would have to be made much smaller if the same whole-target images were to be captured for analysis; secondly, the structure of the target itself would start to become significant (either the photographic film on which it were recorded or the medium using to make the prints). The tests that I have just completed highlight the second of these problems.

In order to make these tests I sacrificed the usual condition that the entire test target should fill the frame and that the analysis is carried out using the same set of four areas that are usually measured. Instead I chose a new set of areas and did a large-scale comparison between the new areas and those that are normally employed. The results of this comparison are recorded in the top two lines of the graph below, where the highest line corresponds with the usual test areas and the line just below it comes from the new areas. (Clearly there is an entire investigation to be carried out here looking at the effect that area selection has on the recorded results… but that will have to wait until another day.) 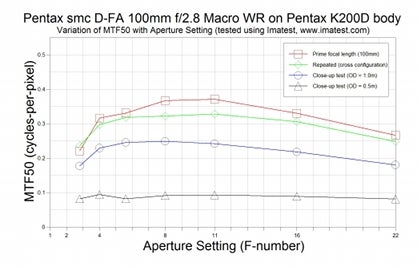 The third line down, which still shows the expected “aerofoil” profile, represents the results obtained from pictures taken at an object distance of approximately 1m, which is about 1/10th life-size. The lower position of the curve suggests that the lens is less sharp when used close-up than it is at normal distances: this seems unlikely for a Pentax specialist macro lens!

The bottom curve (taken at about 1/3rd life size, from an object distance of 0.5m) proves that there is a problem with these tests because the line is essentially flat: what we are seeing here is the sharpness that is contained within the test target itself rather than any indication of the resolving properties of the lens used. In short, numerical testing of this sort is not useful under these conditions.

Rather than trying to find a better quantitative measure I resorted to the same method that I have long used for macro lenses… simply taking some real-world macro pictures and inspecting the results visually. The two sections shown below are enlargements from the primary focussed area of the picture that appears at the top of this review (which has been cropped top and bottom but still has the full width of the original picture). 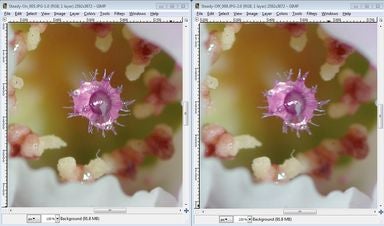 The flower shown in close-up measures about 6mm across its petals so, since the Pentax K200D’s User Guide gives the sensor dimensions as 23.5 x 15.7mm, we can estimate the reproduction ratio as being 0.92x (which is clearly very nearly 1:1). The area in the centre of the flower was less than 1mm across in real-life and the “hairs” were only about 1/12th of a millimetre thick yet they have been rendered with very good clarity indeed.

Incidentally, the two sections were taken from pictures that were captured using the Pentax K200D’s on-board anti-shake correction switched on (left) and switched off (right). In both cases these images were the best of four that were taken under the two sets of conditions: image quality varied very little within each set and, in general, the “switched on” pictures looked just marginally better than those taken without anti-shake correction.

In short, Pentax’s 100mm f/2.8 Macro WR lens works very well close-up but it is impossible to quantify its performance with test targets that are designed for use at much smaller reproduction ratios. No doubt this is a topic to which I will return again in future.

If you would like to be alerted when future ‘blogs are posted then please follow me on Twitter: my @JonTarrant_WDC feed is used only to announce the publication of new ‘blog entries so you will not be bombarded with lots of casual ramblings!