As regular readers of What Digital Camera may have detected (and I make no apology for returning to this topic) I really hate seeing the word “macro” on lenses that don’t have a true macro specification. After all, what is the point of having a word that has a specific meaning if it gets used in a way that the meaning does not allow?

When used correctly, “macro” refers to an image that is at least the same size as the object it records. In other words, macro-photography (or photomacrography) is all about recording life-size images and involves specialist lenses that are optimised for this purpose. An “extended close-range focussing” lens is not the same thing as a true macro design and to use the latter term simply because the former expression is too long to put on the barrel of a lens is not a good excuse.

The long-established convention, tabulated in Sidney Ray’s fantastically comprehensive book Applied Photographic Optics, classifies general photography as anything up to 0.1x magnification, close-up photography as the range 0.1x to 1.0x and photomacrography as 1.0x to at least 10x and even as much as 50x. That said, from about 20x upwards we stray into the realm of low-power photomicrography, which becomes high-power at between 50x and 100x. 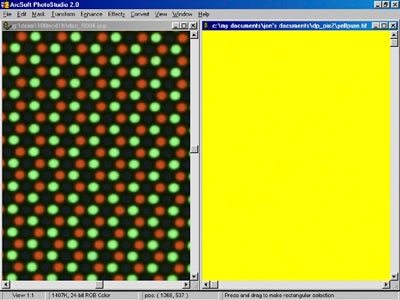 (Shown above is a macro view (left) of a CRT screen that has been filled with pure yellow (right). The picture was taken using a Nikkor 105mm macro lens.)

My theory about the reason for the misuse of “macro” is the reduced size of electronic sensors compared with film. In days of old, a life-size image of an entire butterfly chrysalis (a typical entry-level macro image) would fit imposingly into a 35mm film frame: the arrival of smaller APS-C and Four-Thirds sensors has meant that the same subject now bursts out of the frame and a lower magnification has to be used to record the same composition. This in turn means that an apparently “macro” image no longer needs a true macro lens if we are thinking only about filling the frame (rather than about the actual ratio of the image size to the object size).

I have some sympathy with the problem that lens manufacturers have to face when indicating their specifications in a brief and enticing way but I sincerely regret the loss of rigour that comes from blurring the meaning of technical terms. And while we’re at it, does anybody want to have a debate about spiral and helical staircases?