The image of the day has to be this stunning photo of this gull braving the waves which today won the main prize at this year’s British Wildlife Photography Awards. The photographer, Steve Young, from the Isles of Scilly, beat thousands of entries to scoop the top £5,000 prize.

The picture of the herring gull was described by one of the judges as “a unique and striking image” and one that captures “the power, chaos and intensity of the ocean as it surrounds the majestic gull”. 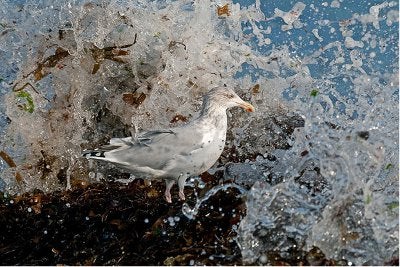 Competition judge Tom Hind, from Getty Images, said, “I like the defiance in this shot – the gull’s refusal to be moved in the face of this crashing wave seems to sum up a peculiarly British stoicism. It’s also a great example of how the commonplace can be transformed in a judicious moment.”

The British Wildlife Photography Awards, now in its second year, aims to celebrate the diversity of the natural history of the British Isles and the talents of all photographers practising in the UK. Winning images and pictures receiving judges’ commendations form part of a series of nationwide exhibitions, including a premier launch at Hooper Gallery, London from 14 – 30 October.

To find out where the exhibition will travel to and to see the other winning images visit www.bwpawards.org. The organisers have also released a book of the winning entries, which is available from AA Publishing at www.theAA.com/shop.