Good books on The Science of Imaging are few and far between but Graham Saxbyu2019s is one of the best. For that reason, and also because Iu2019m honoured to be among some very high-calibre contributors whose photographs are included in the book, this u2018blog entry is an unashamed tribute to Saxbyu2019s work.

I can justify writing what amounts to a plug for Graham Saxby’s Science of Imaging in this ‘blog because Saxby includes three substantial chapters devoted to various aspects of lenses and two further chapters on astronomical imaging and close-up photography. Not to mention a very readable explanation of the Fourier model of image formation.

Such is the quality of Saxby’s expertise that the First Edition of his book was published by the Institute of Physics. The IoP version was a paperback volume and I’m delighted to say that CRC Press has published the Second Edition in hardback – as is more befitting of a book that should have considerable longevity as a future reference source.

The book is “old fashioned” in that its colour illustrations are confined to a discreet middle section of pages. This means that, for example, two Ishihara (colour-blindness testing) targets appear in monochrome as part of the running text and also later in the colour section: the former reproduction hides the numbers (as would colour-blindness) whereas the latter reveals the digits in their full glory (assuming that the reader has normal colour vision).

My own contributions include two pictures of which I am particularly proud. They show the same car (a Lancia Fulvia Zagato) being driven around a race-track, photographed at the same point and therefore travelling at roughly the same speed. Yet in one picture the car is clearly longer than in the other. How can that be? Checking the distance between static background objects shows that the apparent size difference applies only to the moving vehicle… 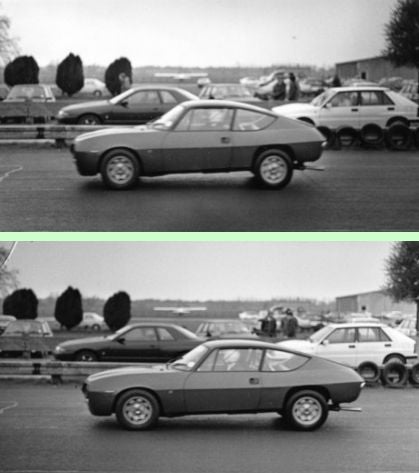 So in one case the shutter is “chasing” the car whereas in the other case it is “passing” the car: the former arrangement results in the car being recorded “longer” than in the latter case. Nobody these days, in an era of massively retouched celebrity portraits, really believes that the camera never lies but modern manipulations are post-capture whereas the shutter-direction effect illustrated here is a genuine camera phenomenon.

It’s an intriguing and not often seen distortion – and also one that I’m really pleased both to have caught on film and to see published in Graham Saxby’s book.

Not because my pictures are included but because the overall quality of information on offer is so very high, I highly recommend Graham Saxby’s book to all readers who seek an accessible and informative explanation of many aspects of photographic imaging.