This issue will run and run but here, once again, is a look at the question of whether full-frame or APS-C sensors get the best quality from any given lens.

Sony dSLRs, such as the Alpha 850 used here, incorporate an interesting feature that allows the user to choose full-frame or APS-C image capture. This is very useful when photographing distant subjects that, in a full-frame image, are surrounded by lots of unwanted background. By cropping in-camera you can avoid storing larger-than-necessary files that are destined for manual cropping later, post-capture.

This ability to select either full-frame or APS-C capture also provides the perfect opportunity to test the same lens over different areas – because in this case the sensor itself doesn’t change: all that varies is the capture area. The importance of this statement truly becomes apparent when testing the same lens on different bodies, when the influence of the camera itself can become apparent.

I’ve reviewed the Sony 70-300mm f/4.5-5.6 G SSM lens in the December 2010 issue of What Digital Camera, which went on sale in newsagents today (30th October) and I also commented on the body’s full-frame or APS-C capability. Here I’ve taken a second look at the same lens-and-camera combination, varying the capture area. I’ve also got some data comparing the effectiveness of the Alpha 850’s in-camera image stabilisation but that’s for another time.

The graph below is rather different from the format I usually use in that it shows lens performance at a single aperture (f/8) for four different focal-length settings and the two capture areas. As it happens, the retest graph displays a marginally lower performance than was obtained in the published test but this is not a significant difference. What is significant, however, is the fact that the full-frame curve (the blue line) sits comfortably below the APS-C curve (the red line). 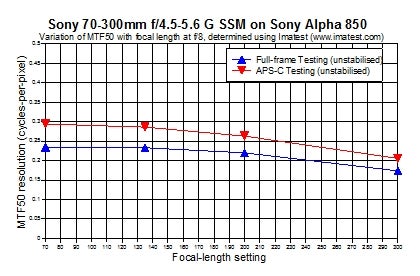 Although its is not always the case, in this instance it is clear that by exercising your choice of full-frame or APS-C capture in favour of the latter you not only discard potentially unwanted parts of the full-frame image before capture but also enjoy the benefit of higher resolution in the centre of the image field. Of course, the higher central resolution is also present in the full-frame image too but lower resolution towards the edges of the frame reduces the overall figures recorded.

The latest test is much fairer and its results do not in any way detract from the performance of Sony’s lens. What this test does is to confirm the truism that a lens which has been designed to cover a full-frame sensor is likely to give a better performance when used with a smaller sensor when all other factors are equal.