If you use a full-frame lens on a smaller-format sensor, what happens to image quality? Does using only the centre of the lens field improve image quality or are matters relating to image quality more complex than this simplistic suggestion implies?

When investigating the image quality that a lens delivers it is sensible to use the largest sensor that the lens can accommodate. The theory is simple: testing image quality over the largest area is both the best way to set a level playing field and also the most critical way to perform such a test. This ensures, for example, that a full-frame lens and an APS-C lens are both tested at the respective limits of their use. Conversely, it would be easy to criticise an image quality test that was based on tests performed using an APS-C sensor if the lens being tested were capable of covering a full-frame sensor.

I am not a fan of assuming that common sense applies at the best of times but when it comes to looking at image quality our assumptions are sometimes so deeply ingrained that we don’t realise we’re making them! So what does “common sense” tell us about the results that should be expected from an APS-C sensor compared with those for the same lens determined using a full-frame sensor?

A few people might suspect a rat in the very fact that the question is being asked; others might even have noticed the odd reference to image quality measurements using APS-C sensors as part of some of my What Digital Camera reviews of full-frame lenses, such as in the Group Test of fast 50mm primes earlier this year. 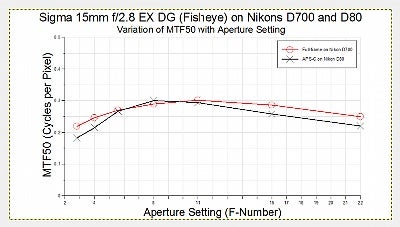 Sigma full-frame 15mm Fisheye lens tested on a full-frame Nikon D700 (red line, above) and a DX/APS-C Nikon D80 (black line, below). Data processed using Imatest analysis (www.imatest.com). You can read more about this particular lens test in the July issue of WDC, which will be published very shortly.

The last of these observations is easy to explain, using the reduced image field argument, but the second requires more thought. I don’t have a definite answer (with proof) but the front runners, in my opinion, are sensor quality and image size. The former is based on the notion that larger sensors are probably more critically designed, tested and aligned when installed to give the best possible results; the latter is based on the fact that small pixels, as used in APS-C sensors, may get close to or fall below the Airy Disk size for the lens and prevailing aperture setting.

Whatever the explanation, the trend has been observed on several occasions now and has never yet been refuted. So the bottom line is this: if you want optimum image quality you should think seriously about buying not only full-frame lenses but also a full-frame dSLR. Or a dedicated micro-format digital system – but that’s for another time.