Diagonal background effect created by fixing a piece of dark ribbon across the front of the lens, held in place by the bayonet-fit lens hood. The image is slightly cooler than the normal version of this portrait (see below) owing to the deep blue colour of the ribbon used: using truly black ribbon or strip of paper will help to minimise this problem. Photograph (c) Jon Tarrant.

Previous ‘blog entries have spoken about aperture effects and how, for example, a tiny aperture can create starburst effects. This time I’m going to look at a way of creating background effects using a straight-forward non-digital technique.

The theory is very simple: every element in a picture contains information about the subject photographed and the aperture through which the picture was taken. It is common, for example, to see polygonal background shapes in pictures that are taken at slightly closed-down f-stops. There is nothing much you can do about this but you can create other background effects that are entirely under your own control.

The portrait shown above, with its “diagonal” background effect was created by taking the picture with a piece of dark ribbon pulled across the front of the lens at an angle. The image-forming light has picked-up the diagonal stripe but the effect is only really visible in out-of-focus areas in the background of the picture.

Another way to create the same background effect is to stick a piece of black card or plastic across a spare filter and then to screw or slot this in front of the lens.

There is a slight loss of light caused by the opaque stripe so you will need to over-expose the image by an amount that depends on the width of the strip compared with the diameter of the front element of the lens. I used +0.7 for this picture but it’s easy to inspect the image and histogram on a digital camera and then to adjust the exposure accordingly.

You don’t need to confine your background effects to diagonal stripes. You might, for example, want to paste a small opaque triangle in the middle of a plain filter so that all the background areas become angular. Or you could even use a letter of the alphabet that will “brand” the background of the image. (A friend and I experimented with this technique as a way of watermarking silver-halide prints when I was involved in pre-digital wedding photography some years ago.)

This is a ridiculously simple way of creating an in-camera background effect but there are two things of which you should be aware. The first is that AF systems are likely to be foiled by the stripe so you may need to use manual focusing and look at off-centre areas of the image. The second is that you must set a wide aperture to prevent the stripe from becoming visible across the entire image, like a massive black line. The picture shown here was taken using a Nikon D700 fitted with Nikon’s AF-S 85mm f/1.4 lens set to f/2. For comparison, I’ve also included the “normal” version of this portrait below. 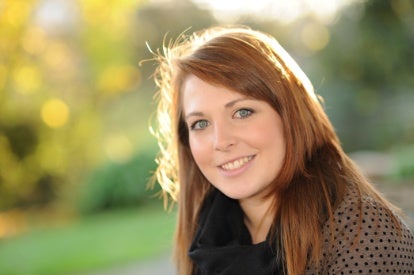