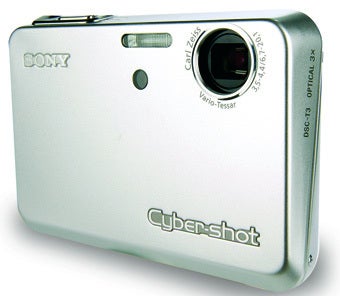 Several companies such as Vosonic, Nixvue and Archos have been making portable hard drives for years, and have got very good at it. Now the big boys want a piece of the action, so we?re seeing things like the Nikon CoolWalker, Epson P-2000 and Apple iPod Photo. The HDPS-M1 is Sony?s attempt. It is sleek and stylish, with a minimalist design. While other manufacturers are adding features such as high resolution screens, movie and MP3 playback, TV output, slideshows and built-in photo editing, Sony has opted for a one-button operation that simply copies data from your memory card to the internal 2.5-inch 40GB hard drive. This has kept the cost down. It has two card slots, one for CompactFlash types I & II and Microdrives, the other for Sony?s Memory Stick, including the Pro and Duo types. Performance is excellent, copying the mixed contents of a full 512MB SanDisk Ultra II CF card in just over 3.5 minutes. The HDPS-M1 can also serve as an external computer hard drive. It can be bus-powered via its USB 2.0 connection, so using it while connected doesn?t drain the battery. The HDPS-M1 comes with Sony PhotoDiary software which sits in your system tray and starts up as soon as the device is connected to your PC. It then detects the pictures on the drive, sorts them by date, and displays them on a calendar. The software is written by Arcsoft and is just as useless as the Arcsoft Photosuite that used to be supplied with a lot of cameras. You?d be better off not installing the software, and simply copying pictures from the Sony to your PC?s hard drive using Windows Explorer.

VERDICT
This is easy to use, well made and provides a useful amount of bulk storage at a very reasonable price. If you don?t need all the fl ashy extras, it would make a useful addition to your kit bag, especially if you own a Sony camera. Just don?t bother with the supplied software.