Once you have downloaded your photos onto a PC or Mac there's a world of things you can do with them. But first you need to make sure you have the right tool for the job. Here's what to look out for?

Investing in a new computer system for your digital imaging can be a daunting task, especially if it isn’t something you’ve done before. Contrary to what you might be told, you don’t need the ‘latest and greatest’ processor as all modern computers can run an image-editing program at an acceptable speed. While some will be slightly faster the difference is negligible, unless you are working on massive files, using complex filters or want all your programs running at once.
That said, there are still a few key considerations to bear in mind when it comes to your choice of both hardware and software. Luckily we’ve saved you the brainache and listed some of the essentials below:

Operating System
There are two main types of computer system: Microsoft Windows and Apple Macintosh. Both have pros and cons. Windows has over 90% of the market, but Macs are more popular with imaging professionals, mostly because they were designed specifically for this purpose. Early versions of Windows were no match for Macs, but newer versions such as XP perform as well as Macs, so the choice is now down to personal preference. 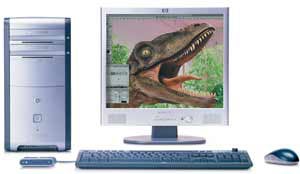 Hard Disk
Where the computer stores your files. The bigger it is, the more space you’ll have for pictures and other documents. As a guide, 40-50 uncompressed TIFF files from a six-million-pixel or eight-million-pixel camera will occupy 1GB of space, and if you produce high-resolution scans at around 50MB this could plummet to as few as 20 images per gigabyte. It isn’t just storage space that decreases as your hard drive fills, as the hard drive is also used to store temporary information when the computer’s memory (RAM) limits are exceeded. This is referred to as ‘virtual memory’ and when the amount of available disk space diminishes so too does the virtual memory, slowing down the whole computer system. So get as big a hard disk as possible – it’s amazing how quickly you’ll fill it when you shoot digitally.

RAM
Temporary memory used for storing work in progress. Data held in RAM is lost once the PC is shut down, unless it’s saved first. The more RAM you have, the bigger the image files and software applications you can handle. It’s important that you find out how many empty slots your computer has for memory and what capacity RAM chips it can take. Some computer systems cost less because they are not very expandable. You may find that your low-cost computer comes with 512MB of RAM installed, but has only one additional slot for memory and will take only RAM ‘modules’ of up to 512MB. In this case 1024MB (1GB) is your upper limit. However, if the same machine could accommodate 1GB chips – or had four slots for RAM – this would increase its capacity to 2GB. Put simply, the more slots you have, the more memory you can add, so find out the maximum capacity of a computer before you buy. Look for a computer that can accommodate at least 2GB of memory in total if you want to be able to expand your machine in the future and start out with at least 512MB of RAM for image editing.

Processor
The processor is your computer’s ‘brain’ and is essentially the part that does the number crunching – be it a simple calculation or a complex image-editing routine, translating your commands into actions. Processors are typically speed-rated using gigahertz (GHz) as the measurement, with one gigahertz equalling one million cycles per second. The faster it is, the less you’ll have to wait around for things to happen. It doesn’t help that different processors with the same speed rating may actually perform differently in real-world use due to their design architecture – Apple Macs, for example, were often faster than Windows-based PCs with equivalent on-paper processing power – but the differences have become negligible with the introduction of Windows XP. 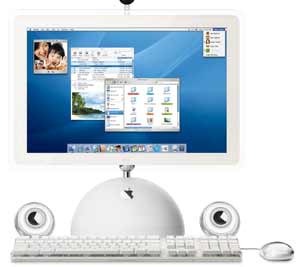 CD/DVD Writer
You’ll need one or other of these, either built-in or external, for archiving all the hundreds of images you’ll accumulate. As well as providing a means to install software, a CD or DVD drive with a recording facility allows you to burn images or data onto a disk. A single DVD can hold up to 4.7GB of data – more than six times as much as a CD (700MB). This makes DVDs good for those with large numbers of images. There are several different formats of DVD, but many DVD drives are now multi-format devices. Writable disks (DVD-R and DVD+R) may only be written to once, whereas rewritable disks (DVD-RW, DVD+RW and DVD-RAM) may have data written and rewritten onto them (100,000 times with DVD-RAM and 1,000 with DVD-RW and DVD+RW). Many DVD writers also read and write to CDs, so a DVD±RW drive is a good starting point.

The home office
For serious digital photography it’s a good idea to set up your digital workstation in a quiet place with good light. Take regular screen breaks to avoid eye strain and, if printing, check your prints in the light conditions they’ll ultimately be viewed in (usually that’s daylight).

Connectivity: USB or FireWire
In the world of peripherals (cameras, printers, scanners and external hard drives) there are only two types of connection that are worth having – USB and FireWire. USB arrived prior to FireWire and in its first incarnation allowed data transfer rates of 1.5Mbps (mega or million bits per second) or 12Mbps depending on the peripheral device attached. This has changed with the introduction of USB 2.0 which has the potential to employ a much faster 480Mbps ‘hi-speed’ data transfer rate.

The number of USB sockets fitted is not a major issue as you can use a hub to connect several devices to a single port. Still, three or four USB 2.0 ports will help keep things tidy, and if you choose a machine with a USB socket on the front this will make life easier.

In terms of computer connections, FireWire (IEEE 1394) is the new kid on the block. On paper, FireWire – rated at 400Mbps – isn’t quite as fast as USB 2.0 ‘hi-speed’, but the difference in design often means FireWire has the edge in ‘real-world’ speed. A new development is FireWire 800, which offers double the speed at 800Mbps. This is not offered on many new machines, but FireWire 800 PCI cards are available for those wishing to upgrade. Two FireWire ports (400 or 800) is a good starting point