MicroSD (adapter)
The MicroSD adapter allows you to use your MicroSD in a standard SD slot.

Speed Class
SD Speed Class is universally compatible, specified as Classes 2, 4, 6, 8 and 10, each indicating the minimum write speed in MB/s.

Lock switch
SD memory cards have a lock switch that can slide up and down. When locked, the contents of the card cannot be modified or deleted.

Capacity
64GB memory cards should provide you with approximately 16 hours of HD video recording and just over 12,000 JPEG images from a 16-million-pixel camera. 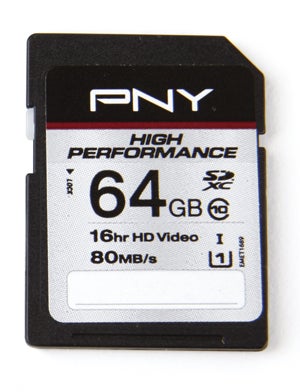 PNY’s High Performance range is aimed at advanced amateur photographers and videographers who want to shoot fast-moving action stills and capture quality full HD footage. Although this card is positioned below the company’s Elite range of SD cards, it still performed well in testing and actually managed to record the single fastest read speed of 93.65MB/s, an average read of 90.65MB/s, and an average write speed of 61.34MB/s during our repeated benchmark tests.

It took 13-15secs for the PNY card to record all the images before allowing me to continue shooting at
full-speed burst, placing the PNY card somewhere around the middle in terms of buffering performance compared to the other cards tested. 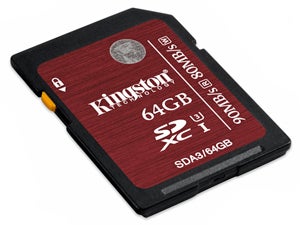 Designed with 4K video recording in mind, this Kingston SDXC card boasts a 9x faster read speed than standard Class 10 cards. I expected it to be one of the top performers in this round-up and I was not disappointed. On average, the Kingston card managed a read speed of 91.14MB/s and a write speed of 82.39MB/s – only the SanDisk Extreme Pro card (right) delivered a speedier performance. The Kingston card matches the buffering performance of the SanDisk card, both taking 12-13secs to cool off before full-speed 12fps shooting can recommence. However, it betters the SanDisk model with its guaranteed minimum read and write speed of 30MB/s.

The UHS-I Class 3 rating is the suggested standard for recording 4K footage, so if you’re planning on shooting 4K video, I’d recommend this card solely on that basis. 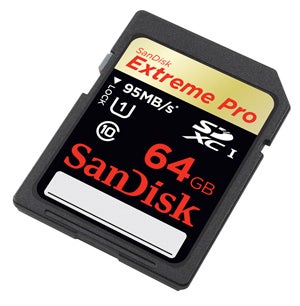 SanDisk states that the Extreme Pro has a maximum read speed of 95MB/s and a maximum write speed of 90MB/s, and while it delivered close to that performance, it did not reach the top values promised by the manufacturer.

Perhaps an unidentified hardware issue was the problem, although I was using a top-spec computer to conduct the tests and two different benchmark tests. However, that said, of all the cards tested, the SanDisk model delivered the most consistent high-speed results overall, with an average read speed of 90.17MB/s and write speed of 85.66MB/s. I was very impressed with the card’s performance, and also found that the cool-off period following burst-mode shooting was on average at least 2-3secs quicker than most of the other cards that were tested. 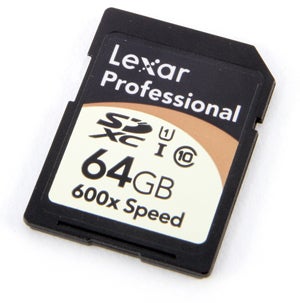 Known for being a consistent and reliable manufacturer of memory products, Lexar delivers another solid card in the 64GB-capacity class. One of the biggest selling points of Lexar cards is the strength of its brand name, which is often the choice of professionals who can’t compromise data stability for speed. This card wasn’t the fastest of the bunch, delivering an average read speed of 88.24MB/s and an average write speed of 63.68MB/s, as well as being 1-2secs slower than the PNY card at buffering the images, but it also wasn’t the slowest. 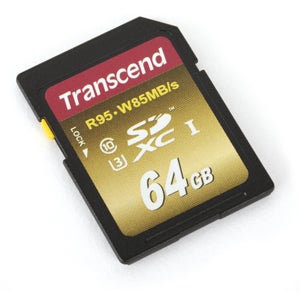 Transcend’s U3 card has been created to handle the most demanding of image-capturing tasks, including 4K video recording. With it’s UHS Speed Class 3 specification, this card will deliver a minimum constant write speed of 30MB/s, which is 20MB/s more than the top-performing SanDisk Extreme Pro can guarantee. However, if your device is not UHS-compatible it will revert to Speed Class 10. Despite the 95MB/s read and 85MB/s write speeds claimed by the manufacturer, the card only managed an average read speed of 90MB/s and an average write speed of 83.16MB/s in our tests.

Although falling a little short, this card came third to the SanDisk Extreme Pro and Kingston models, and given its minimum guaranteed constant write speed, the Transcend card makes a good case for itself. 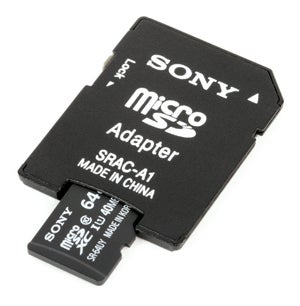 We thought it would be interesting to include a MicroSD card to see how it stacks up against physically larger models.

A number of manufacturers, including Nikon, are opting for smaller cards in their compact cameras and they provide the added benefit of also fitting into compatible smartphones and tablets. Our tests suggest that while read speeds from this smaller card aren’t far off those from the larger SD cards we tested, write speeds and buffering are significantly slower. The Sony memory card is good quality, delivering an average read speed of 84.10MB/s and an average write speed of 20.36MB/s. Although its performance was the slowest in this test, MicroSD card compatibility with most smartphones and tablets give it an advantage by removing the need for wireless transfer of images. While it only merits three stars this time, we will include it in a MicroSD round-up in the future. The SD card adapter comes included in the box.

To put these cards through their paces, I repeatedly ran integrity and benchmark tests using two independent pieces of software – H2testw and CrystalDiskMark – which tested the read and write speeds of the cards. I also tested the buffering performance of all the cards in this round-up using the super-fast Panasonic Lumix DMC-FZ1000, which is capable of shooting 12 frames per second, firing off frames in high-speed burst mode and then timing the cool-off period before I could continue capturing burst images at 12fps.