It’s inexpensive, lightweight and ultra-wide, so is the new 10-18mm zoom a must-have lens for Canon APS-C camera owners? Jon Devo finds out

For many years – ten, to be precise – Canon has satisfied the ultra-wideangle needs of APS-C users with the classic EF-S 10-22mm f/3.5-4.5 USM lens. After seeing the popularity of this lens take off on cameras such as the EOS 300D, 350D, 20D and 30D, rival manufacturers such as Sigma and Tamron followed suit and offered arguably better alternatives to Canon, creating a fiercely debated series of lenses in the APS-C ultra-wide range.

With the Canon EF-S 10-18mm f/4.5-5.6 IS STM, APS-C camera owners have a cheaper alternative to the 10-22mm. There are already a number of superb lenses in this popular range, but this is a welcome addition from Canon and is garnering much attention from photographers who shoot landscapes and architectural images, in particular. Also, the inclusion of STM technology should pique the interest of any APS-C-format DSLR video makers, too.

Keen to reclaim ground in the hotly contested ultra-wideangle lens market, Canon’s lightweight 10-18mm zoom comes with a number of attractive features. Let’s begin with the inclusion of Stepping Motor Technology (STM), which Canon claims allows the lens to focus ‘near silently’, and having used it myself during video shooting I can report that the focusing is, to all intents and purposes, inaudible. Not only that, the motors actuate swiftly, achieving almost instantaneous autofocus. Manual-focus override is available, or you can toggle full manual focus on and off via the switch on the barrel.

With the 4-stop image stabilisation on the lens switched on, it was possible to shoot relatively sharp images handheld with shutter speeds as slow as 1/2sec, but I achieved my most consistent results shooting at around 1/6sec-1/20sec.

Aspherical and ultra-low dispersion lens elements do a good job of combating spherical and chromatic aberrations, while ghosting and light flares are suppressed by way of Canon’s Super Spectra Coating.

Targeting entry and enthusiast-level photographers, Canon has been conscious to keep the cost of this lens down, but by no means does it feel cheaply constructed. It owes its svelte 240g weight partly to its plastic mount and plastic barrel, but don’t let that put you off. It’s made from a tough plastic and, given the light weight of the lens, I don’t imagine the force it would generate from being dropped would be enough to do significant damage. 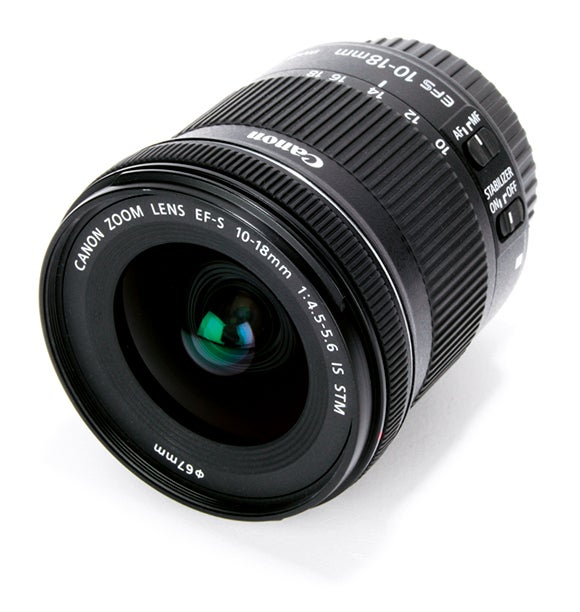 The only physical drawback some may experience when using and operating this lens is the electronic manual focus – it’s almost too smooth and lacks the tactile resistance that users of lenses with mechanical focusing mechanisms will be accustomed to. On the other hand, those who want to take advantage of its 0.22m close-focusing capability, or wish to shoot video and want a non-resistant focus, will greatly appreciate the super-smooth motorised manual focus on this lens. Landscape shooters will also appreciate that focusing takes place internally, so turning the focus ring will not affect any graduated ND filters or polarisers mounted on the lens.

Designed for APS-C-format Canon cameras, this lens is a perfect fit for models like the EOS 70D, feeling well balanced and adding very little weight for the user’s left hand to hold when steadying the camera. Its light weight also means it avoids the top-heavy feeling one gets when using more cumbersome lenses on entry-level DSLRs such as the 100D, for example. I did find it a little tricky toggling the camera’s AF/MF and image-stabilisation switches while looking through the lens, however, which meant I would occasionally have to take my eye from the viewfinder, but I trust their positioning will become more familiar with use. 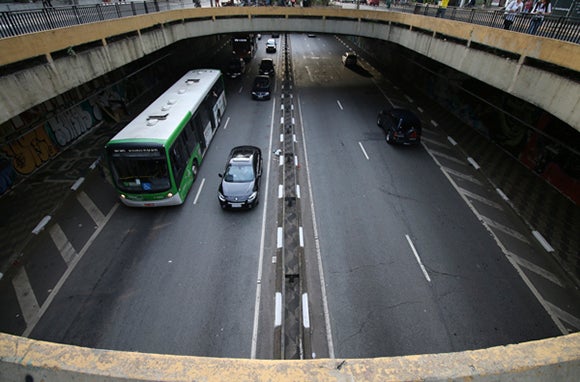 Image: Edge sharpness is good, but a little vignetting is visible at the 10mm end. However, it’s not overly pronounced

For the majority of this test and for the images that accompany it, I used the 10-18mm lens on a Canon EOS 70D. Images captured with this lens have good contrast and a pleasing level of detail, backed up by our scientific testing that revealed that the lens remains relatively sharp from its centre to the corners of the frame, particularly between f/5 and f/11. I challenged the performance of the lens in low-light situations where the 4-stop image stabilisation and lens sharpness could easily be exposed if they weren’t up to the job, but under these conditions I still managed to capture usable images.

Occasionally, I noticed some lateral chromatic aberration towards the edges of the frame, showing up as colour fringing around areas of high contrast such as parallel light and dark lines. This was more visible at the 10mm end than at 18mm, but this is a common feature of many ultra-wide lenses, and it can be easily corrected using software such as DxOMark. Barrel distortion and vignetting are somewhat pronounced in the corners at 10mm, but some recent Canon DSLRs can compensate for this and make corrections inside the camera to reduce these optical effects. Alternatively, more precise adjustments can be made using computer software. 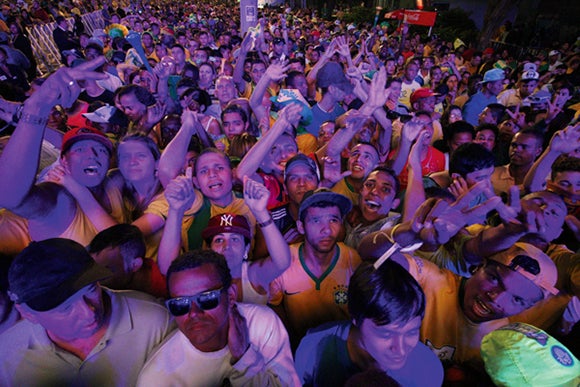 Image: At its widest aperture, the depth of field holds focus throughout the frame, so is ideal for photos of large groups

Testing reveals a lens that’s consistent in its imaging performance. It gives similar results from the centre to the edge of the frame across the full zoom range, although it’s sharper in the centre at 18mm. It’s also consistent across the aperture range, from wide open down to f/11, after which diffraction reduces sharpness. 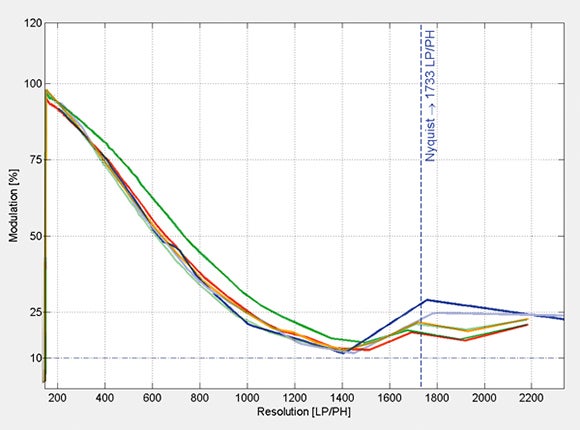 Shading is visible wide open at 10mm, illustrated by the graphic. This kind of sudden fall-off in the corners can be obvious in some pictures, but is easy enough to fix in post-processing if desired. It also reduces on stopping down or zooming in, so isn’t a problem most of the time. 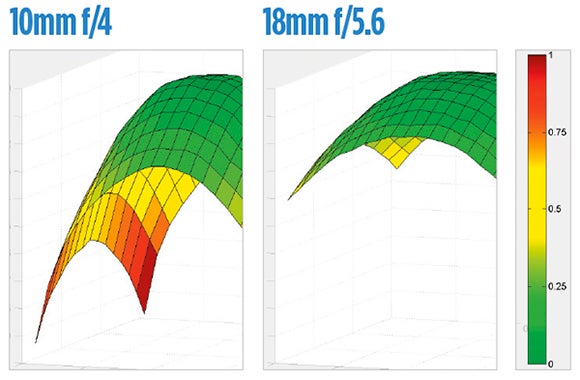 Typically for this kind of lens, the 10-18mm zoom shows visible barrel distortion at wideangle, although it’s not at all excessive. The relatively simple profile also makes it easy to fix. It reduces progressively on zooming in, and at 18mm there’s barely any distortion at all. 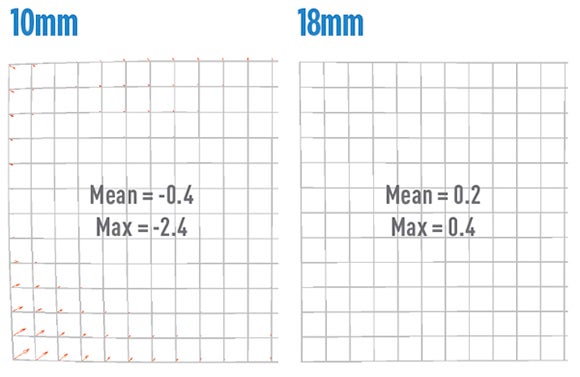 Despite its ultra-wideangle, I’d happily use the Canon 10-18mm f/4.5-5.6 as a walk-around lens with a mid-range prime such as the EF 50mm f/1.4 in my camera bag. At its widest aperture the depth of field avoids being shallow, keeping large groups in focus, but with this being an ultra-wide lens it’s important to remember that people and features near the edges of the frame will be stretched slightly.

Taking its price and performance into account, this has got to be a must-have lens for any Canon APS-C camera owner who is interested in shooting landscape and cityscape images. At such a competitive price, it’s hard to think of a reason not to include this in your lens collection if you’re looking to expand.