JVC GC-PX100 Review - The JVC GC-PX100 offers is a premium video camera that also offers a stills capture at its full 12.1MP resolution. Find out how it rates in the What Digital Camera JVC GC-PX100 review...

The JVC GC-PX100 is a serious bit of video capture kit. It offers a host of high-end shooting modes to suit the videographer’s every need with a range of shooting formats and frame rates, including a range of slow-motion capture modes.

The model’s DSLR-esque design hints at the GC-PX100’s other capabilities – namely stills capture at the model’s full 12.1MP resolution – thus equipping it as a serious stills contender as well.

The model’s sensor is a 1/2.3in CMOS chip – and is therefore around the same size as a standard compact, although it does feature back-illuminated technology. The model also features a large optical zoom, with a 10x optic covering a focal range of 29.5 – 295mm, while it also features dual image stabilisation.

The rear of the camera features a tiltable 3in LCD screen combined with touch panel technology and a resolution of 460k-dots. The screen also features a removable hood for viewing in bright lighting conditions.

There’s no denying that the JVC GC-PX100’s real strength is its video capture technology. The model offers 1080 / 50p capture in AVCHD, MOV and MP4 formats at 40Mbps, 36Mbps and 28Mbps respectively.

As mentioned previously, the GC-PX100 features somewhat distinctive design. It’s styling is more akin to a small DSLR with a tele-photo lens attached then a traditional ‘camcorder’, with the large vari-angle LCD screen filling the most of the model’s rear

Other intelligent features of the design include a large mode dial on the camera’s top, a pleasing zoom rocker alongside it and a port to which you can affix the model’s viewfinder.

All of these external controls mean that the GC-PX100 offers a pleasing user experience. Any functionality needed falls easily to hand, allowing for the camera’s controls to be adjusted quickly and without rooting deep through the menus.

This would be a good thing in any instance, but it’s made even more important by the fact that the camera’s menu system is far from the simplest or most intuitive. The interface is comprised of graphics which aren’t the clearest, while most functionality is reasonably deep rooted therein.

It’s also worth noting that the model isn’t the most responsive in use. Switching between different shooting settings can take a while; switch between capture and review, for instance, and you’ll find yourself waiting for quite a number of seconds before the camera is ready to operate again.

There’s also a slight issue with the model’s screen. At 460k-dots it’s far from the highest specified on the market, and as a result reviewing images in bright light can be an issue. This problem can be avoided to an extent through either the removable hood for the screen or by using the removable EVF, although it’s a shame the LCD isn’t better specified.

The theme of sluggishness is also felt through the camera’s AF operation, which is also on the slow side. The good news is that at the wide end it generally manages to lock accurate focus, although it does struggle at the tele end.

While the GC-PX100 is a capable stills shooter, its real forte is video capture. There’s very little to fault in this regard, with the video shooting snapping in to action in an instant. The model’s image stabilisation is welcome when shooting video as when recording at the tele end of the zoom it offers a much-needed level of stability.

Although the GC-PX100 is styled in such a way that it could be mistaken for an entry-level DSLR, it’s very much a video camera which is capable of shooting stills.

The good news is that when it comes to the quality of video recorded, it’s difficult to fault the GC-PX100. Videos display a good level of detail, a reasonable dynamic range and a pleasing level of smoothness.

Although the camera can shoot at frame rates of up to 500fps, from 100fps upwards the resolution is greatly decreased. The video is still useful for slow-motion capture, however the resolution greatly hampers image quality.

As for still image quality, the PX100 suffers from having a 1/2.3in sensor with regards to detail capture. Images appear fine when viewed at the standard size on screen, although when magnified and viewed at 100% fine detail appears grainy.

There are also issues with the dynamic range of stills images, with highlights burning out. Colour reproduction is good, however, with a pleasingly natural palette on show. 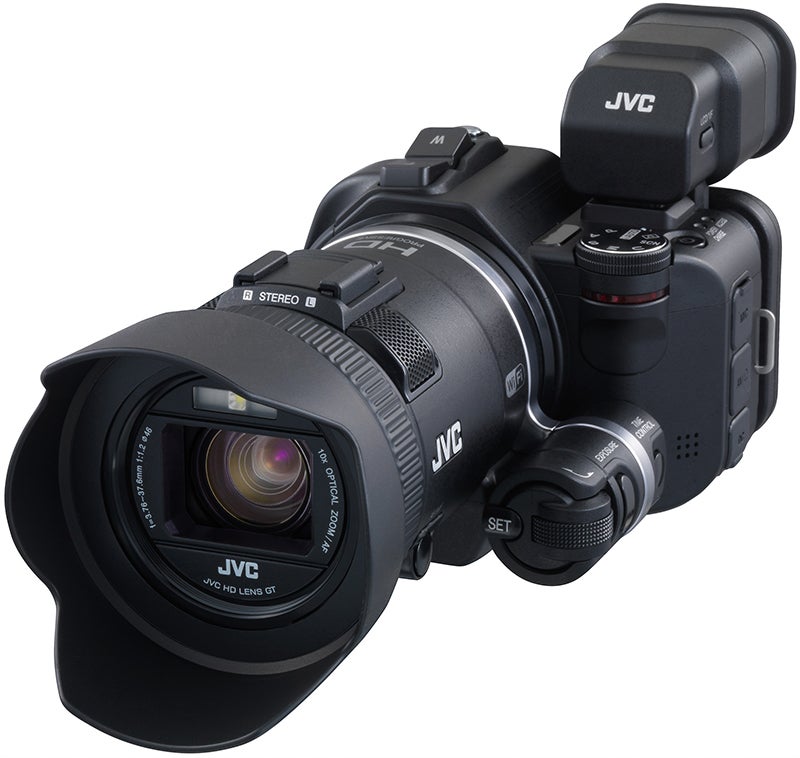 The JVC GC-PX100 is a premium camcorder and as a result arrives with something of a premium price tag. You’ll not get much change out of £1000 for the model currently, and for that kind of money you’ll be forgiven for expecting a premium level of performance.

The good news is that with regards to video performance and quality, the PX100 delivers. The range of shooting options and file formats will suit those taking their video seriously, while the full manual control will also be welcome.

Unfortunately the level of still capture is disappointing, especially when you consider the price high price tag.

So, if you’re looking for a premium camcorder the PX100 could well be for you, however unfortunately you can’t rely upon it for the same level of stills capture as some video-enabled DSLRs at a similar price tag.