The world’s most prestigious wildlife photography competition, Veolia Environnement Wildlife Photographer of the Year, has revealed the commended images from this year’s competition, 2 of which can be seen here.

They are part of the selection that will join more than 100 other prize-winning photographs, including the overall winning images, when the exhibition debuts at the Natural History Museum, London, on 22 October. It will then tour nationally and internationally after it’s debut in the capital after 11 March 2011. More than one million visitors are expected to have seen the exhibition once the tour is complete.

Now in its 46th year, the Wildlife Photographer of the Year
competition is an international showcase for the very best nature
photography. The competition is owned by two UK institutions that pride
themselves on revealing and championing the diversity of life on Earth -
the Natural History Museum and BBC Wildlife Magazine. It is an
international leader in the artistic representation of the natural world
and a competition that photographers worldwide, professional and
amateur, aspire to win.

Each year thousands of entries are received and judged by a specially
selected expert panel. The winners are announced at an awards ceremony
that takes place later this month at the Natural History Museum, London.

The 2011 Wildlife Photographer of the Year competition opens for entries in January. 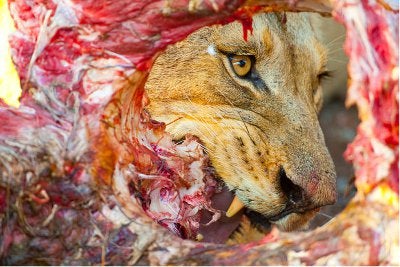 Photo captions: (Above) A carcass-eye view by Juergen Ross (Germany). Category: Behaviour:
Mammals -Highly Commended. A feeding lioness is framed by the carcass of
a giraffe at South Africa’s Kruger National Park.

(Top of page)Sunset moment by Olivier Puccia (France). Category: Urban Wildlife –
Highly Commended. Overlooking Ramtek in Maharashtra, western India,
Hanuman langurs find the highest point from which to admire the sunset.
Squeezed out of their forest homes by deforestation, Hanuman langurs
have become part of urban life in many parts of India.

See more details of the competition exhibiting at the Natural History Museum on 22 October.