Samsung has announced the Galaxy NX – the company’s new flagship model in the NX-series. Running the Android Jelly Bean 4.2 operating system, the Samsung Galaxy NX improves on the 3G technology as found within the Samsung Galaxy camera and is unlike any other compact system camera we’ve seen before in the way it features 3G/4G LTE technology, which allows it to be permanently connected and ready to share images instantaneously. 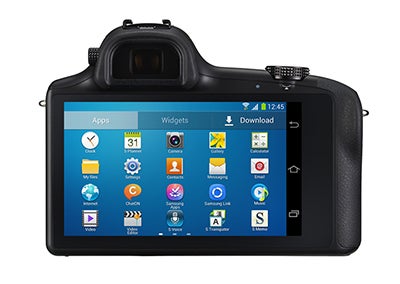 At the heart of the Samsung Galaxy NX lies a 20.3MP APS-C sized sensor that’s been adopted from other NX-series cameras, such as the Samsung NX300. The sensor provides an ISO range that runs from 100-25,600 and is is partnered by a DRIMe IV image processor that’s claimed to deliver the speed and accuracy today’s photographers demand. In terms of the speed at which it shoots, it’s no slouch at 8.6fps and has a maximum permitted shutter speed of 1/6000sec. 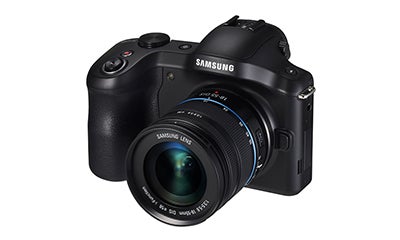 For autofocus, the Samsung Galaxy uses a Hybrid AF system that uses 105 phase detection points and 247 Contrast Detect AF points. Autofocus points have been designed to stretch to the edges of the frame, while the combination of autofocus technologies promises one of the fastest autofocus performances, with a focus acquisition time of 8 milliseconds. 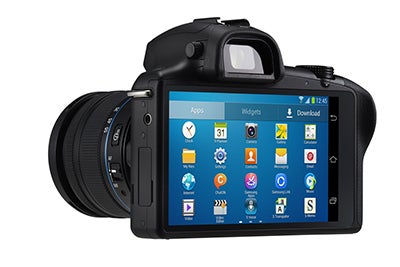 The Galaxy NX features a SVGA electronic viewfinder above its 4.8inch display

One of the main talking points on the Samsung Galaxy NX is the size of its screen and the simplicity of its design. The 4.8inch Super Clear TFT LCD capacitive touch screen takes up a large space at the rear, and above it is an SVGA electronic viewfinder with automated eye sensor. The top plate features a minimalist design with just three buttons to switch the camera on/off, activate the flash and start movie recording. On the subject of video, the Galaxy NX supports full HD video capture at a variety of frame rates that include 1920×1080/25fps, 1920×810/24fps and 1280×720/50fps. 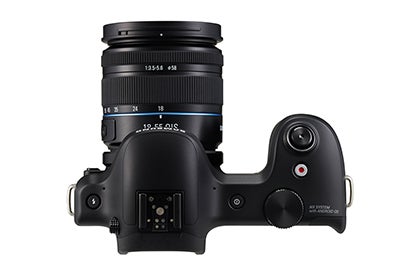 Keen to push the serious photo capabilities of the Galaxy NX, Samsung have ensured the camera features the full set of PASM modes for more experienced users, while life is made easier for beginners with the inclusion of the default ‘Auto’ setting as well as being equipped with over 30 Smart Modes. Smart Modes are specially tailored for people who’d like to produce creative images without having to master the camera’s settings. Some of these Smart Modes include multi exposure, drama, animated photo, vigentte, miniature, colour bracket and Panorama. For added personalization, the Galaxy NX’s Camera Studio allows users to customize settings with the most frequently used applications or camera modes so that photos can be captured exactly how the user wants them in quicker time. 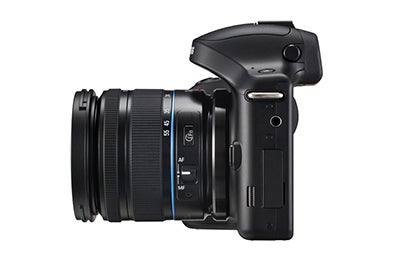 The significance of the Android 4.2 Jelly Bean operating system means that users have the opportunity to choose from over 600,000 applications in the Google Play store. Not only does this mean that you can play Angry Birds on your camera, but you can access a wide range of photography applications to both edit and share images on the go, as well as expand the functionality of the camera and keep it up to date. Dropbox comes pre-loaded on the Samsung Galaxy NX as standard and provides users with a free 50GB capacity for up to two years. 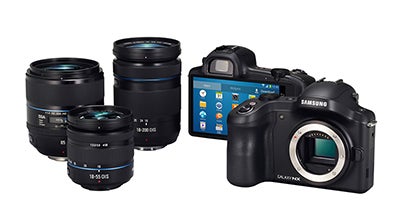 Another feature that’s likely to prove popular with the audience the camera is aimed at is Photo Suggest. This feature uses the cameras built in GPS to work out where you’re shooting in the world before offering suggestions and galleries of some of the best photographic locations close by. Other features include Story Album, which offers a more dynamic way of viewing images on the camera, with or without text. The Story Albums that are produced can then be created into a photo print book that can then be exported and published by the photo book company, Blurb.

The Samsung Galaxy NX is expected to arrive in the UK in the third quarter of 2013, although Samsung say it could hit the shelves by July. At the time of launch, there were no indications of which lenses would be sold with the camera at part of a kit. Pricing was also still to be confirmed by the manufacturer at the time of writing.