The new Ricoh WG-4 and Wg-4 GPS – identical save for the latter’s GPS functionality – are capable of underwater shooting at depths of up to 14 metres thanks to their heavy-duty construction. They are also shock-resistant from falls of up to two metres, freeze-resistant against tenperatures to -10°C and crushproof against weights of up to 100kgf (kilogram force)

Equipped with a back-illuminated CMOS sensor with 16MP of resolution, the WG cameras can shoot at ISO sensitivities of up to 6400. The 4x optical zoom lens on the front of the cameras offers focal range coverage from 4.5mm to 18mm (35mm equivalent 25-100mm), with a maximum aperture of f/2 at the wide angle end.

The WG-4 cameras also come with a range of shooting modes, including Shutter Priority (a first for the WG series), which also automatically selects the ISO sensitivity. There’s also a Night Scene mode, Underwater, Underwater Movie (which the cameras record at a resolution of 1920×1080 at 30fps). Both also come equipped with a 3-inch colour LCD screen with 460,000 dots of resolution, with an Anti-Reflection coating to reduce glare. 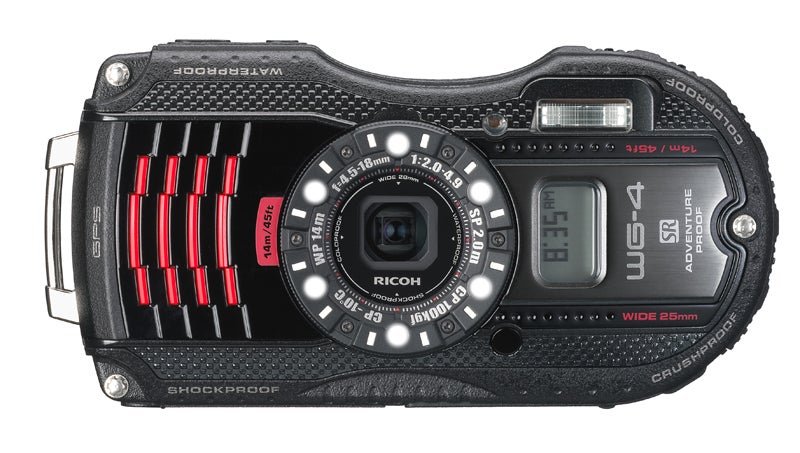 The GPS module on the WG-4 GPS (above) automatically records not only positional data but also comes with an in-built pressure sensor and digital compass.

Both cameras come equipped with six LED Macro Lights around the circumference of the lens barrel to aid close-up shooting. 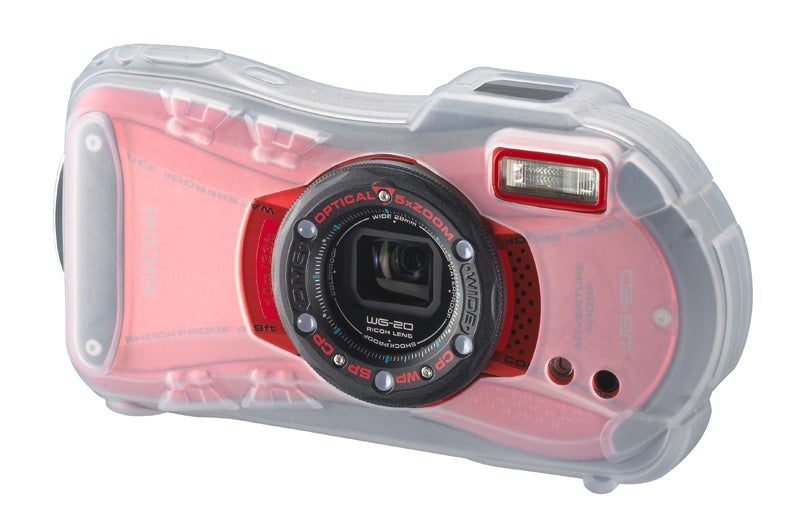 Image: The Ricoh WG-20 in an optional protective jacket

Similar in a lot of ways to the WG-4 cameras, the WG-20 uses five LED Macro Lights around the lens barrel. This allows it to enter Digital Microscope mode, which magnifies the subject under the lights on the 2.7-inch LCD monitor (which sports a resolution of around 230,000 dots).

The WG-20 comes with a 5x optical zoom lens with a focal length coverafe of 5mm to 25mm, equivalent to 25-140mm in 35mm format. It is also capable of HD video recording at a resolution of 1280 x 720p at 30fps, and has triple anti-shake protection to compensate for different kinds of camera shake.

All three cameras are announced with a range of optional accessories, including adhesive, suction cup and and handlebar mounts. All three are also compatible with Eye-Fi wireless LAN SAD cards.