The Pentax X-5 is the latest bridge compact to be released but what features can it offer to make it stand out from the competition?

Pentax has unveiled an all-new bridge compact camera – the Pentax X-5. Not to be mistaken for a DSLR in terms of its looks and design, the Pentax X-5 features an extremely long 26x optical zoom lens covering a focal length that’s equivalent to 22.3-580mm in 35mm terms. The Pentax X-5 also incorporates a back-illuminated 16MP CMOS image sensor with an ISO ceiling of 6400. 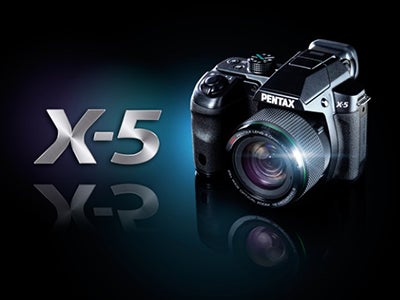 Supported by Pentax’s latest Super Resolution technology image processing engine, the X-5 is capable of producing a high-speed burst of up to 10fps for a maximum of 30 images in a single sequence. Adding to this is the X-5’s hybrid dual shake-reduction system that couples Pentax’s sensor-shift type of shake reduction with a digital SR mode to more effectively compensate for any unwanted camera shake.

At the reat the Pentax X-5 comes equipped with a 3in, 460k-dot LCD screen that can be tilted up and down. Just above this is the X-5’s electronic viewfinder that offers full dioptre control.

Elsewhere there’s the option to record full HD videos at 1920×1080 resolution at a frame rate of 30fps. Interestingly, a micro-HDMI port is also provided for the output of recorded movies and sound to external devices such as an HDTV.

Compatible with Eye-Fi wireless LAN SD memory cards and made so that it can be used with a Pentax remote controller, the X-5 will be finished in both a black and black and silver guise. At the time of the X-5’s release no indication of pricing had been announced.