Just days ago, Kodak launched a DSLR style camera with a 24x optical zoom. Well Olympus has decided to go one better. Amongst a whooping nine launches today is the SP-590UZ, with a 26x optical zoom and the ability to take 10 shots per second.

Available from March, it is a 12 megapixel model which, as well as its lens delivering a 35mm equivalent focal range of 26-676mm, offers Dual Image Stabilisation and Shadow
Adjustment Technology. 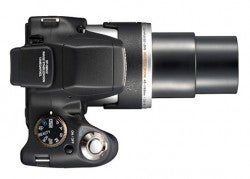 Also worth a mention are the 130x optional TCON-17N Teleconverter, which boosts the power of the lens up to 130x, then there’s the camera’s 2.7 inch HyperCrystal II LCD and 18 built-in shooting modes. 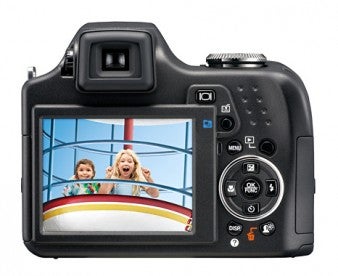 Adds Olympus: ‘When more exposure control is required,
full Manual, Aperture Priority, or Shutter Priority can be selected. So
that photographers can be certain of the results they’ll get, Perfect Shot Preview
allows the different effects of a particular setting, White Balance for
example, to be compared next to each other on screen before the photo
is taken.’

You also get Advanced
Face Detection of up to 16 persons, built-in flash and wireless flash control directly from the camera body and movie recording at 30fps.

The Olympus SP-590UZ is compatible with both xD-Picture Card and microSD cards too and can shoot RAW files.

No price as yet but we’ll bring you an update as soon as possible.