The Fuji X-Pro1 is the company's first Compact System Camera and we've got the hands-on exclusive. Read on for What Digital Camera's Fujifilm X-Pro1 preview...

After announcing that a Fujifilm Compact System Camera (CSC) would see the light of day in 2012, we can reveal that new model will be the Fujifilm X-Pro1 and What Digital Camera has had a hands-on play with this marvelous new camera.

The X-Pro1 may be the company’s first step into the CSC market, but it’s not a model designed to pander to the mass market. Oh no, far from it: the X-Pro1 is retro-styled, features an APS-C size sensor (with some other tricks up its sleeve – more on that later) and a brand new Fujifilm X-mount that’s tailored for high-end, demanding users. Leica, watch your back.

As much as Fuji won’t want to see the X-Pro1 brandished as an ‘X100 with interchangeable lenses’ that is, we must admit, the initial picture. But even when it’s put like that what’s not to like? The X100 was the most innovative camera of 2011 and we’ve got very high hopes for the X-Pro1.
The main feature that sets the X-Pro1 miles apart from the X100, however, is its brand new X-Trans CMOS sensor. APS-C in size, this latest sensor is a Fujifilm exclusive that uses a new 6×6 colour filter array instead of the more regimented bayer colour array filter (2×2 in RGGB formation). 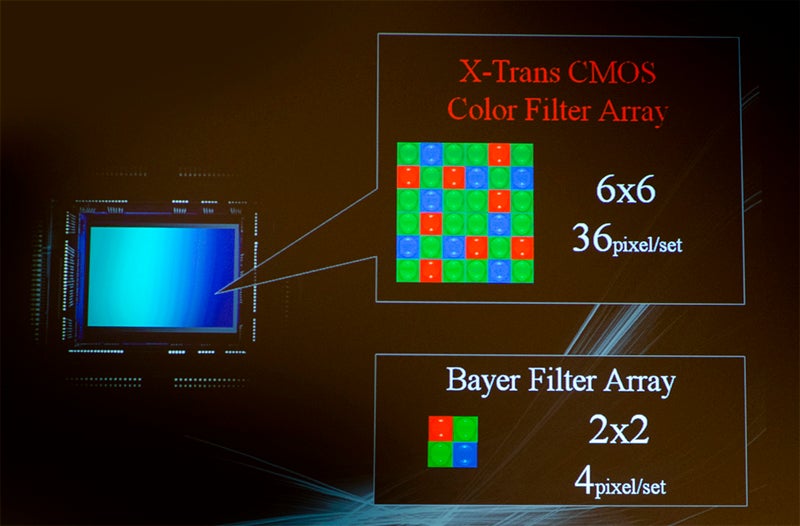 The X-Pro1’s 36-section array means there’s always at least one red, green and blue colour available at each horizontal and vertical position, meaning full colour information is still available to the camera. However this broader, less repetitive pattern removes the need for a low-pass filter as the X-Pro1’s less rigid array means images shouldn’t suffer from moiré or false colour. Fujifilm says that the X-Pro1’s results will be more film-like than any digital camera before it and even as far to say that the APS-C size X-Trans CMOS sensor will outclass a full-frame sensor’s abilities. A bold claim indeed, but based on just how good the X100’s sensor was, and on the assumption the X-Pro1 is a big step forward, we suspect that image quality will be second to none. An infrared filter still features in the camera despite having no low-pass filter.

At launch the X-Pro1 will come with the option of three XF-series prime lenses: a 35mm f/1.4, an 18mm f/2.0, and a 60mm f/2.4 macro. There will be an 18-72mm f/3.5 and 20mm f/1.8 launched later in the year, but the X-Pro1, rather like Fuji’s X100, is all about fixed-angle-of-view, high quality primes. Each lens has a manual aperture ring (including 1/3rd stops) for the ultimate in control – now that’s a proposition unlike anything else at this price point. Each of these XF lenses will fit to the camera via the new Fujifilm X-mount fitting (it’s not a Leica M-mount as some had been predicting) and it’s likely that unofficial third party companies will be prompt to make adaptors for other lens fittings.

Using the standard 18mm lens the X-Pro1’s optical viewfinder provides a wider-than 100% field-of-view. Add the longer lenses and the camera even includes built-in magnifier to ensure that the 35mm lens provides full coverage as per the 18mm lens. When future lenses are launched after the initial trio, however, there won’t be stronger magnifiers, though the 10-pin connector will communicate with the camera to add appropriate crop lines using the EVF overlay when viewing through the optical viewfinder – as is the case with the 60mm macro lens. With zoom lenses the crop lines will move as the zoom is adjusted in a rangefinder fashion, though Fuji doesn’t recommend using the optical viewfinder for lenses longer than 60/70mm.

The X-Pro1’s on-body controls are much like the X100‘s, but with subtle advances: The familiar shutter speed dial now has a lock button and the exposure compensation dial is recessed into the body to avoid any accidental adjustment. A new Q.Menu button on the back of the camera loads up a 16-option on-screen/in-viewfinder menu for easy adjustment of settings.

The X-Pro1 not only includes the usual Provia, Astia and Velvia ‘film stocks’ in their digital incarnations but also adds new ProNeg.S and ProNeg.H too. There’s even a multiple exposure mode where the first exposure shows on screen.

From the hands-on experience we’ve had with the Fujifilm X-Pro1 it looks to be an exceptional camera. The body only price has an estimated RRP of £1200-1500 in the UK, while each of the lenses are anticipated to retail for between £400-600 each.

Keep eyes to whatdigitalcamera.com for a full review in the near future…