The Fuji X100: What Digital Camera takes an exclusive hands on first look preview of the fixed-lens Fujifilm Finepix X100.

The Fujifilm Finepix X100 was a surprise announcement at Photokina in Germany last September. Since then we’ve been closely following its progression – first seeing an early prototype (without the viewfinder) at CES 2011 in Las Vegas and now, exclusively, getting the hands on treatment with a completed model. Finished versions of the X100 will be shipping, so Fuji claims, in just a few weeks time – so those looking for one of the first models may want to buy your Focus on Imaging 2011 tickets right now as, so rumour has it, there will be a handful available at the Birmingham show. 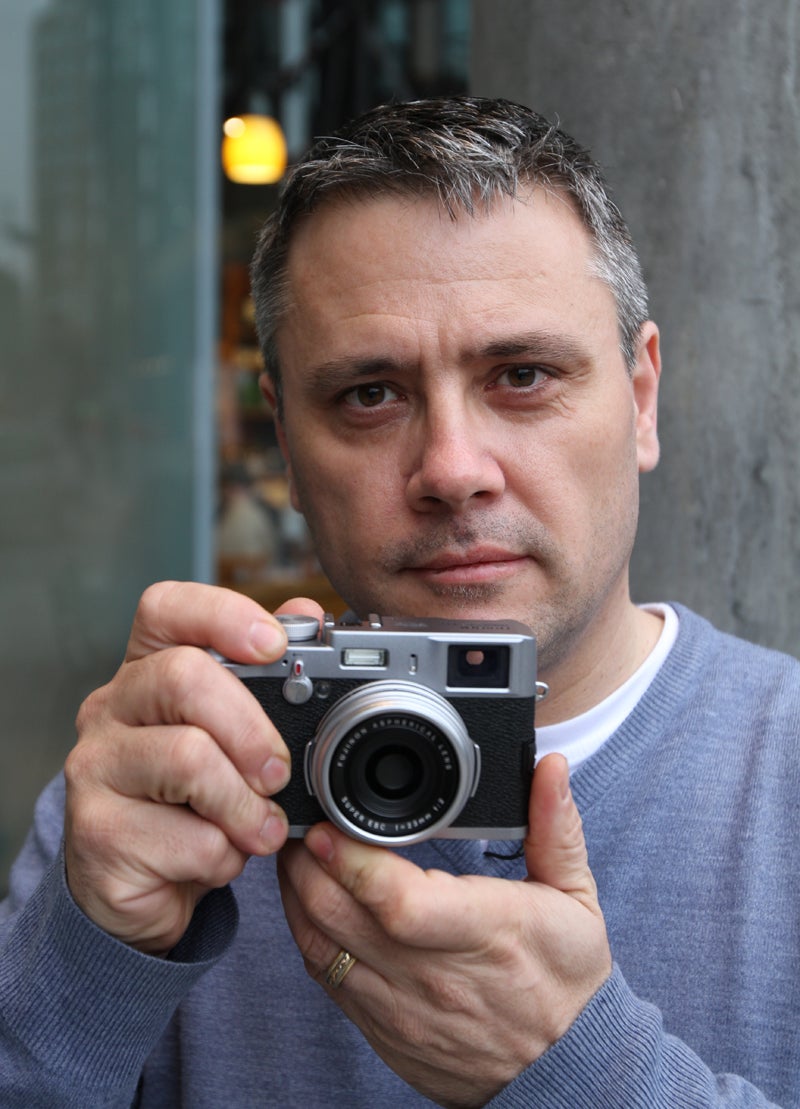 Despite being a niche, fixed-lens compact with a 23mm (that’s 35mm in a full-frame 35mm equivalent) f/2.0 lens and 12.3MP APS-C sized sensor, the combination of those features and the X100’s retro-looking design have been a calling card to the photo enthusiast since its announcement. The X100’s currently exclusive Hybrid Viewfinder – offering both optical and electronic viewfinder options rolled into one – has also been a huge point of interest too.

The full Fujifilm FinePix X100 specification was announced just a few weeks ago, but it’s actually getting a proper hands on opportunity that gives a far truer feeling of what the X100 is all about…

The absolute stand out feature of the Fuji X100 is its reverse-Gallilean ‘Hybrid Viewfinder’. By integrating a prism for the 1.44m-dot Electronic Viewfinder it’s possible to selectively utilise the electronic view. By that we mean you can look through what’s a true optical viewfinder, take a shot, and the prism will then feed back the resulting image from the electronic viewfinder for review. Or, alternatively, the viewfinder switch on the front of the camera toggles between a full time optical or electronic view as to your preference. It may initially sound confusing, but it’s not at all when you pick it up to use. It’s very clever stuff indeed and, at this moment in time, completely unique too. Where the X100 gets yet more clever is that digital overlays can be selected while still looking through the viewfinder – so you have a true optical view but can have real time digital autofocus point location feedback or view a virtual horizon level for example. It looks great and is of physically large proportions. The optical viewfinder offers a greater than 100% field of view that’s actually slightly wider than the picture you’ll end up taking. While a large number of DSLR viewfinders ‘crop’ into your composition and capture an image that’s slightly broader, the X100 essentially does the opposite – you’ll end up capturing 90% of what you see through the viewfinder as the extra 10% is an additional ‘outside of the frame’ benefit. However, due to this broader view it is possible to see some of the X100’s lens protruding from the camera to the bottom right of your view ever so slightly – not that it’ll ever end up captured in your images, of course. The electronic viewfinder, on the other hand, is a straight 100% ‘what you see is what you get’ field of view.

The X100’s lens itself is a fixed 23mm (35mm in full-frame equiv.) that covers the 12.3MP APS-C sized CMOS sensor. The fixed lens format will limit the camera’s appeal, but those die-hard traditionalists looking for the ultimate way to mimic classic 35mm street photography in a digital form will be more than happy with what this camera can do. Close-up shots are possible to around 10cms from the lens when in macro mode, though there is likely to be some barreling at such a medium-wide focal length – it was visible through the viewfinder towards the edges.

Put the Fuji X100 next to any other compact camera and it looks like a completely different beast. Unflinching in its style, the X100 brings together a proper (f/2.0 to f/16) aperture ring around the lens itself as well as an independent shutter dial on the top of the camera. It feels delightfully retro, but its also possible to assign both options to ‘A’ (Auto) for a fully automatic point-and-shoot experience, effectively an ISO Priority mode as this can still be adjusted via the Fn (Function) button. As well as a front thumbwheel, there’s a button-cum-toggle switch on the back that can be used for magnification when manually focusing as well as shifting aperture by 1/3 stop instead of full increments from the aperture ring. Manual focus has a distance bar across the bottom of the 2.8in, 460k-dot LCD for fine adjustment, though the clicking sound made when adjusting the lens was perhaps a little disconcerting. Also, considering the camera’s size, it’s a shame an even larger LCD screen wasn’t squeezed in for an even more full experience.

The Fujifilm Finepix X100 also has some other top features: the shutter itself has a proper screw in filter thread and long-exposure fans will be happy to see both ‘B’ (Bulb) and ‘T’ (Time) options on the shutter dial. And traditional film fans will be best pleased at the addition of Velvia, PROVIA and ASTIA modes to mimic your favourite slide or reversal film. Even a built-in ND filter can be deployed for longer exposures, or utilising the full f/2.0 aperture in brighter conditions.

But the FinePix X100 isn’t all about old traditions: the inclusion of a real-time Panorama capture mode as well as various shooting styles and even a 720p HD movie mode are testament to its up-to-date stance. A standard tri-pin hotshoe mount means that external flash is possible when using one of the optional EF-20 (GN 20) or EF-45 (GN 45) flashguns. There is a centrally-located flash on the camera body itself, which is well placed to avoid stray fingers, but is less powerful and more direct than one of the optional extras.

Using the X100 feels great too and the 49-point AF array (25-point when using optical viewfinder view) covers almost the full breadth of view. This means near edge-to-edge autofocus can be attained, while accurate and customiseable focus point adjustment is also available whether looking through the viewfinder or using the rear LCD screen.

Although Fuji was taking a firm stance in a ‘no images’ policy prior to the X100’s official release date, we snapped away a variety of shots and viewed them at 100% on the camera’s rear LCD screen. To say that they’re anything short of stunning would be an understatement. Indeed it seems that Fuji’s latest EXR processing (note: the X100 does not have an ‘EXR sensor’, it’s the processing that takes the ‘EXR’ crown this time) does a good job of crunching through images. Fuji claims that the EXR Processor ‘achieves the highest resolution, sensitivity and dynamic range ever produced by a FinePix camera for the ultimate in image quality every single shot,’ and we’d have to say that, at this stage, we’re inclined to agree. Even an ISO 3200 shot revealed almost no image noise to our eyes and looked like an absolute winner. The ISO 200-6400 range should certainly impress, though ISO 12,800 can only capture at half resolution – but we doubt it’s going to be a setting that you’re likely to frequently want to use.

All in all we think the X100 is potentially great. One way to look at it is essentially a better-specified Leica X1 for considerably less money. And we think the X100’s retro finish looks even cooler too. It won’t be for everyone, but for the discerning enthusiast who’s had one of these cameras on their minds since its announcement at Photokina 2010, we don’t think it’ll disappoint in the slightest. As soon as we have a full X100 review unit to use even more thoroughly we’ll be bringing you our full and comprehensive X100 test…