Upon its introduction in 2010, Samsung’s EX1 marked a new direction for the company. Having already dabbled in the DSLR market with Pentax, before pushing through its NX series of compact system cameras, the new model appeared to cater for the discerning user wishing travel light. With peers such as Canon’s PowerShot G series and Panasonic’s LX range the model already had a standard to live up to, and upon its review we found much to praise.

That was two years ago, and now a successor, the EX2F, has arrived. The following is based on a pre-production sample of the EX2F which we’ve had for the past few weeks. As such, it should only be used as a rough guide as to what’s changed and how the camera performs, rather than a definitive review (as certain elements are likely to change). We’ll update this with the full review once we have a production sample.

The model builds on the EX1’s feature set in a number of ways which are likely to please the target market. The lens, for example, has been marginally extended from 24-72mm to 24-80mm, but perhaps more significantly, it has had its maximum aperture at the wide end extended from f/1.8 to f/1.4. This, as Samsung proudly points out, qualifies it as the world’s brightest compact camera lens, and broadens its usability in low light and for creating shallow depth of field in images. 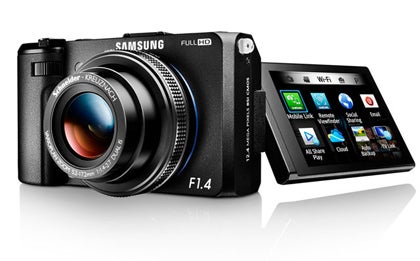 The sensor maintains the same 1/1.7in dimensions as before, but it now incorporates 12.4MP instead of 10MP. While this change may concern a few enthusiast wanting the use the camera primarily in low light, their fears should be alleviated with the knowledge that Samsung has chosen to use backlit architecture for the sensor’s construction, which has in the past shown to make a significant difference in terms of image noise for cameras of this sort.

Perhaps the most significant difference is the integration of wi-fi functionality. The camera is able to connect to social networking sites such as Facebook, and send images to email accounts, in addition to connectivity with smartphones. The Auto Backup feature, meanwhile, means that images can be safely stored safely outside of the camera’s memory card into Cloud storage.

Other features of note include a Dual IS system, which utilises both Optical and Digital stabilisation systems, as well as full manual control via the traditional PASM quartet. As with a handful of its peers the camera also incorporates an ND filter, which can be used to reduce exposure times either for necessity or creativity. Full HD video recording has also been thrown in, with stereo sound recorded alongisde. 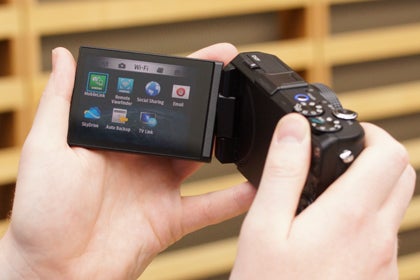 As would be expected by the target market, Samsung has paid great attention to the EX2F’s build quality and styling. Magnesium alloy has been used to ensure the body is solid and guarded against knocks and scrapes, while all buttons press positively into the body and are labeled clearly. There really isn’t any area where it looks as though Samsung may have skimped, although some may prefer the more tactile grip from the EX1 and brushed metal finish to the smoother and more mottled effect used here.

Furthermore, some may appreciate more definition from the command dial located within the grip, as it’s not always easy to operate in a hurry. Placing this on a slight slope would help, as, when the camera is held naturally, the other fingers around the grip often need to be moved to allow the dial to be comfortably accessed. 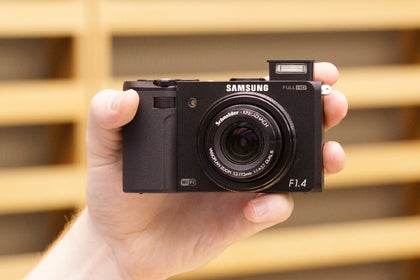 Samsung has revised the EX1’s menu system for the new model, with the new black background making the white text easier to read, and a reorganisation of the menu items into a more logical running order. As before, options are accessed and changed through presses and turns of the control ring, the combination of which is easy to get accustomed to. The ring moves freely enough for options to be scanned through quickly, and the camera responds very well to both turns and presses. 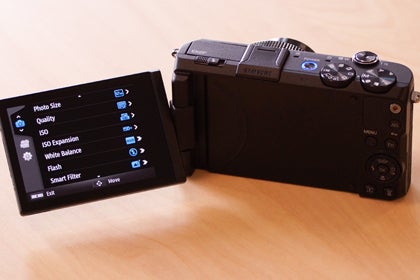 Samsung has been vocal about the advantages of the OLED technology used for its displays, and the EX2F’s 3in Swivel AMOLED display appears to show the scene with plenty of detail and a pleasing naturality. The viewing angle appears to be pleasingly wide (as we’ve come to expect from an OLED screen) although there appear to be a few minor issues with the stability of the feed which may be resolved in the full production samples. 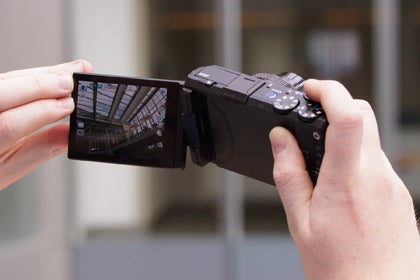 The two mode dials on the top plate incoproate many shooting and exposure options, and although both move freely neither is likely to be unintentionally knocked out of place. There’s also a small pop-up flash hidden inside the camera’s top-plate,
which springs up promptly once its catch is released, although it
doesn’t travel quite as high as some of the flashes we’ve seen on other
recent cameras, which may well produce less flattering results when used
as a fill-in flash for portraits. 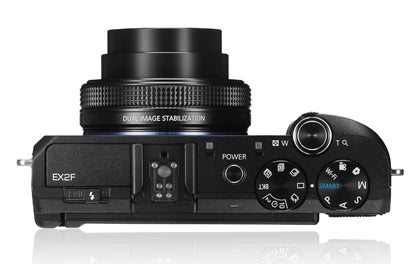 A quick test of the camera’s wi-fi functionality shows it to promptly connect to a local network and upload an image to Facebook in a matter of seconds. Emailing the same image happens just as quickly, although the image is automatically resized and there appears to be no way to change this. Having to input login details for a wi-fi networks and social networking accounts is little bother with the QWERTY keyboard, although doing so makes you realise how much more convenient this would be though a touchscreen.

The lens moves steadily through its focal range as it is adjusted, which is great for accurate framing but less practical when needing to get from one end of the lens to the other in a hurry. Fortunately, the focusing system is a snappier when bringing subjects into focus, and focus is automatically adjusted as the lens is zoomed. Better still, there appears to be virtually no shutter lag once the image has been focused. 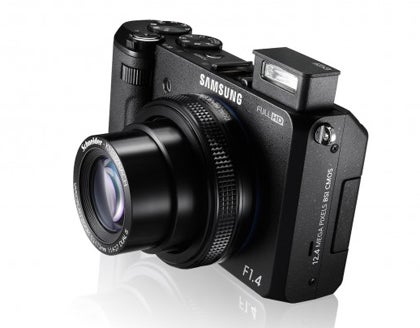 With the EX2F it appears as though a Samsung has made an already competent camera even better, and we’ve come away with an overall positive impression. It will certainly be interesting to see what quirks are ironed out once the full production models arrive, as there are a few minor issues which could easily be adressed. At a launch price of £429 the model looks set to be priced close to the Olympus XZ-1 and Canon’s G12, both of which can be typically found for just under the £400 mark.