Confirming rumours earlier in the week, Canon has added the EOS 500D to its line up of DSLRs.

The Canon EOS 500D (known as the Digital Rebel T1i in the US) matches its 50D sibling in offering a 15.1MP CMOS sensor, over an APS-C sized area, and with full 1080p video recording looks set as a direct competitor to the Nikon D90.

Video files may either be recorded at full HD 1080p at 20fps, or at 720p at 30fps, as well as in a standard VGA resolution.The move makes the EOS 500D the second Canon DSLR to offer HD video recording, following the EOS 5D Mark II released last year.

‘The EOS 500D pushes the boundaries of
what photographers can demand from their cameras, combining exceptional images with full HD video,’ said Rainer Fuehres, Head of Canon Consumer Imaging, Europe. ‘Photography enthusiasts can now capture their most significant moments in a manner that matches their creativity.’

The rear sports a 920,00dot LCD screen measuring 3 inches in size, yet unlike some of the images which surfaced on the internet earlier in the week suggested, the screen cannot be pulled out around various angles to the body.

A nine-point AF system also features on the new model, as does Canon’s EOS Integrated Cleaning system and a 3.4fps burst mode.

The new model follows the EOS 450D announced last year in January, although Canon has stated that the 500D isn’t a replacement for the older model. 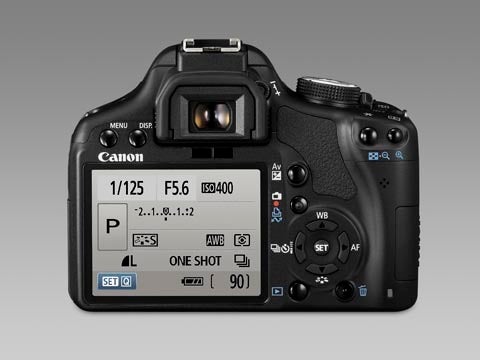