Adobe has redesigned Photoshop Touch for smartphones, allowing users to take precise control of their images from smaller handheld devices

Adobe has announced that it has developed Photoshop Touch so that it’s now compatible with smartphones. Adobe Photoshop Touch was originally released for tablets, however, this latest release brings it to a new audience, such as those using iPhones, iPod touch, and Android smart phones.

Adobe’s Vice president for Creative Media Solutions says “Mobile phones are increasingly becoming the primary tool for people to take and edit photos. Adobe is dedicated to serving our customers’ evolving creative workflow
and we heard, loud and clear, that Photoshop fans wanted some core Adobe
imaging magic on their smartphones.” 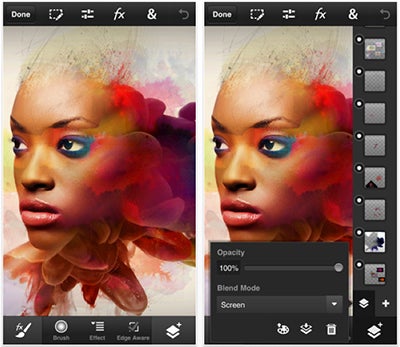 A couple of screengrabs taken from Adobe Photoshop Touch on an iPhone.

Photoshop Touch for phone is integrated with Adobe Creative Cloud and includes access to 2GB of Creative Cloud storage with a free account. Users can sync photos and projects to Creative Cloud, and then continue working with the files from a tablet or Photoshop desktop software.