The prices of 35mm-frame DSLR cameras have fallen, which means they are no longer just for professional photographers. We look at the advantages of buying a full-frame DSLR

The term ‘full frame’ refers to DSLR cameras with an image sensor the same size as a 35mm film frame. Just a few years ago there were only a few full-frame DSLRs on the market, and they cost thousands of pounds. For this reason, most amateur photographers opt for cameras with APS-C-size sensors, which are far less expensive, leaving full-frame DSLRs for professional photographers.

However, full-frame DSLR cameras have fallen in price over the past couple of years. As technology has improved manufacturers have introduced their second-generation full-frame cameras, and with Canon, Nikon and Sony all producing full-frame DSLRs, the market is becoming increasingly more competitive. 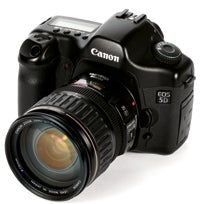 The Canon EOS 5D was the first full-frame DSLR that was aimed at enthusiast photographers as well as professionals, but it cost more than £2,500 when new and was still out of the reach of many people.

Most of the currently available ‘budget’ full-frame cameras have now been on the market for more than a year, and their prices have fallen to reflect this.

So if you haven’t already, now might be a good time to think about switching to a full-frame camera. Some second hand models can be found for as little as £300.

Most enthusiast photographers use APS-C DSLR cameras or micro-system cameras (MSCs) because they are generally more affordable, not to mention smaller and lighter than their full-frame counterparts. However, a full-frame DSLR has significant advantages, which arise because the image sensor is larger than that in APS-C-format or micro-system models.

To illustrate, imagine that 12 buckets are placed in one 3×4 grid and 12 soup bowls in another 3×4 grid, and hundreds of tennis balls are dropped into them. The buckets will be able to capture far more tennis balls than the bowls, despite the fact there are exactly the same number of each.

This simple analogy can be used to describe the way that photosites of smaller and larger sensors collect light rays. If you have 12 million photosites to put on a sensor, the larger surface area of the full-frame sensor means that the photosites can be larger than those on APS-C-format sensors. As such, more light can enter the larger photosites. This in turn can result in improved dynamic range and a reduction in noise levels compared to sub-full-frame cameras. Of course, the precise nature of the improvement depends on how the camera then processes this information.

The larger sensor surface area also means that more photosites can be used. The difference is similar to having the surface of a beach towel and a bed sheet covered in buckets. As the bed sheet is bigger, it will be able fit more buckets on its surface. Once again, the buckets can be used as an analogy for the photosites on a sensor, and it is possible either to make the photosites larger or to keep them roughly the same size as on a smaller sensor, but use more of them. A larger number increases the resolution, which should therefore produce more detailed images. 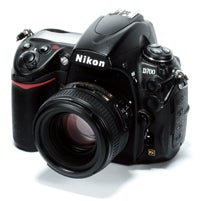 One example of a camera that uses larger photosites to improve dynamic range and reduce noise is the Nikon D700.

It has just over 12 million pixels, like the APS-C-format Nikon D300S. However, the D700’s larger photosites mean its images feature less noise than those from the D300S.

On the other hand, the Sony Alpha 850 uses the extra space on its full-frame sensor to increase the number of photosites in order to produce images of a higher resolution. However, it suffers from more image noise as the sensitivity increases.

Another advantage of full-frame sensors is that wideangle lenses are true wideangles. The smaller APS-C and Four Thirds-format sensors don’t use the entire width of the image circle created by 35mm-format lenses. Instead, they use only the centre of the image, which creates a 1.5x, 1.6x or 2x magnification factor.

The solution is to use wider lenses on cameras with smaller sensors, so an 18mm lens on an APS-C-format camera acts like a 27mm optic, for example. One downside, however, is that wider lenses can be more prone to image distortion.