If you choose to value inkjet printer ink by the millilitre, you might be shocked by how expensive it is compared to a variety of liquid commodities on the market. This, and the real cost in replenishing the ink for your inkjet printer, has naturally driven many of us to explore cheaper alternatives, such as refills and cheaper third-party cartridges from sources independent of the printer manufacturer.

Do independent third-party ink manufacturers have the necessary chemical engineering expertise to produce an alternative ink to that produced by the printer manufacturers? There is plenty of evidence to suggest that many third-party inks are inferior, so it’s a risk to use them.

Printer manufacturers have to tailor the formulation of their inks to suit the particular technological needs of their printer hardware. These formulations are optimised for image colour stability, uniformity and minimal wear and tear on the delicate print heads, keeping them from getting blocked or worn out. Independent testers have, in the majority of tests, discovered that cheap third-party inks don’t produce the same colours as the original manufacturer inks and they aren’t as resistant to fading, sometimes by staggering degrees – with image stability measured in months instead of decades exhibited by original inks. One third-party ink brand even provided a dye-based replacement ink for a printer that required a pigment-type ink. This is akin to putting petrol into the tank of a car that required diesel. It’s even more risky if the replacement cartridge incorporates a recycled print head, as you simply have no idea what its history is.

Are there any dependable third-party inks? It’s difficult to say no, because there might be. But, as yet, there isn’t enough testing of third-party inks to make any sensible recommendations, though there are some specialist suppliers of inks for converting photo printers to use such inks exclusively in bulk, and users do report good results. But these inks aren’t aimed at ordinary casual users.

It’s easy to feel like you’re being ripped-off by printer manufacturers when comparing the cost of original and third-party inks. But many third-party ink suppliers have none of the chemical engineering backup required to produce consistently high-quality inks for your specific printer. Much of the cheap ink on the market affords the vendors very high margins, too. So who’s really ripping off whom?

I’d also argue that the valuing ink by the millilitre is missing the point. Besides the hard work that goes into making that liquid consistent in colour, resistant to fading and sympathetic to the smooth running of your printer, the ink is carefully packaged in its cartridge and costed into the lifetime of the printer. We demand cheap printers, so the manufacturer needs to recoup some of the original hardware cost through the consumables, including ink. Unfortunately, this means that more frequent use of your printer leaves you penalised as there are no established ways of rewarding heavier users with discounted ink beyond the supply, by some manufacturers, of larger-capacity ink cartridges. 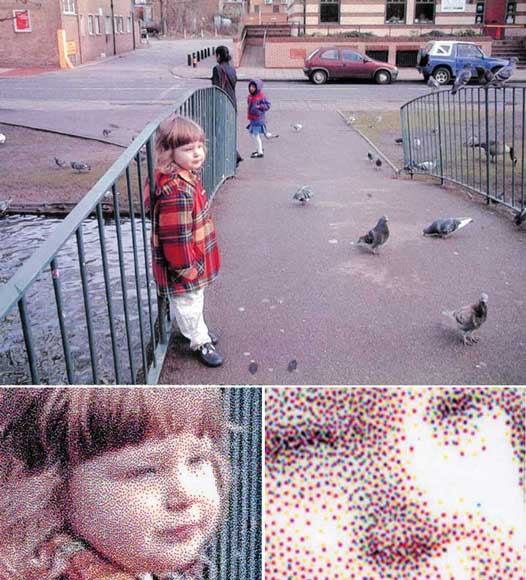 This medium close-up (bottom left) of a typical inkjet print reveals the
dot-dithering that makes up the printed detail that represents the
image on the paper. Magnified further (bottom right) and you can see the individual dots of cyan, magenta
and yellow ink formed as droplets of ink fired from the print head hit
the surface of the paper.