1. Storm Chase
While the midst of a storm may not be the most pleasant of conditions to take photos in, stormy weather has the potential to produce some of the most stunning High Dynamic Range (HDR) images. The combination of broken skies, bright light and gloomy clouds can be difficult to capture with a single shot, but the exposure blending of HDR processing means that you’ll be able to get the correct exposure for every element of the shot, allowing gloomy clouds and bright cloud breaks to sit together in perfect harmony!

So, keep an eye on the weather charts and barometer, and the next time the sky looks moody, pick up your camera and tripod and get that shot. Also, try to predict when a storm is about to hit, an encroaching weather front can provide even more dramatic skies.

2. Taking the Shot
The HDR capture phase involves bracketing several shots at different exposure values, and then combining them in an HDR-specific software package. Due to the exposure bracketing, there are several things to remember in the capture stage… 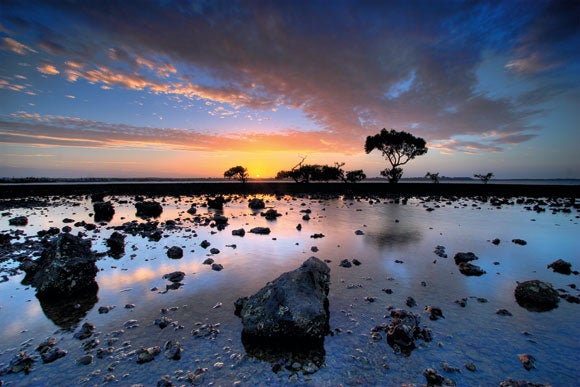 Always use a tripod where possible
One of the most important tips for the capture phase of HDR photography is to use a tripod wherever possible. When bracketing exposures – depending on your camera’s frame rate – it will take a short time to complete the bracketing process. During this period, if there is any camera movement at all, you’ll struggle to align the exposures in your HDR software. As a result you’ll have a final image in which ghosting (the appearance of multiple images marginally misaligned and therefore having blurry edges) will appear, and so the full HDR effect will be difficult to achieve.

Keep the ISO as low as possible
During the HDR production process noise can appear more readily, or amplified, and as a result makes itself known in areas such as shadows and highlights. Some of the best HDR images are those with nice clean lines and minimal image flaws, so keep the ISO set as low as possible.

Always capture and process at the highest quality
HDR processing is designed to display the maximum amount of image data from a scene. As a result it follows that, in each individual exposure, you should try to maximise the image data recorded. To do this, be sure to always shoot at the highest quality setting available, or Raw if possible. Also, during your digital workflow, attempt to use the highest quality file type that your computer will sensibly process – highest resolution JPEG is fine, but TIFF files are preferable if your processor is up to it!


3. In-Camera Histogram
A good way to sense when it may be a suitable time for an HDR shot and when isn’t, is to take a look at your camera’s histogram. If there is visible clipping at either end of the histogram on the image you’re trying to capture, ie a peak at either the far left or far right of the graph, then that image data is being lost in either the highlights or shadows of the image.
To remedy this, simply bracket enough exposures to make sure that there is an even balance of peaks throughout the range of exposures, and therefore image data for all areas of the frame.