CUSTOMISATION METHOD
Elements 5.0 contains a new Convert to Black and White feature which allows you to customise the way colour areas are mapped to grey during conversion. The dialogue consists of large before and after previews, six conversion presets based on popular subject types, an Amount slider that controls the strength of the changes, and eight thumbnail buttons for fine-tuning. This enables more sophisticated conversions by allo 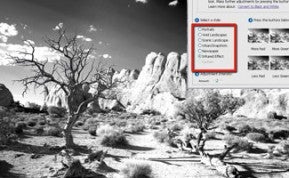 wing you to adjust which colours (red, green or blue) feature more prominently in the final result.

STEP 1
With the colour image open in the Full Edit workspace, go to Enhance > Convert to Black and White. Click through the different conversion styles, checking the After preview for a suitable result. 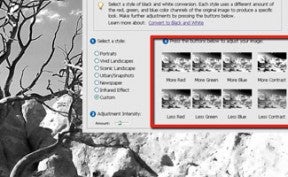 STEP 2
To customise the conversion, select a conversion style that is closest to your desired result, then fine-tune by clicking one of the adjustment buttons – more blue/less blue, etc. For a more dramatic effect, also click the opposite of another option – less/more red. 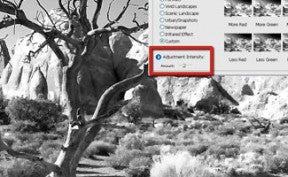 STEP 3
Where the changes made with each click of an adjustment button are too great, use the Adjustment Intensity slider (bottom left of the dialogue). Move the slider left for smaller increments of change, and to the right for more dramatic effects. Click OK to apply the conversion, Reset to remove current settings or Cancel to quit. 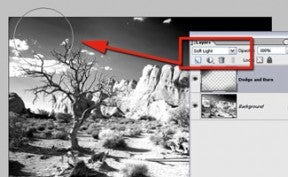 STEP 4
To balance out the resulting tones in the converted image, add a new blank layer. Change the layer’s blend mode to Soft Light and label the layer Dodge and Burn. Darken parts of the image by painting on the layer with a black soft-edged brush. To lighten parts, switch the foreground colour to white before painting over the chosen area.

NON DESTRUCTIVE METHOD
This technique is based upon a custom conversion process created by Russell Brown from Adobe. It uses the Adjustment Layers technology in Photoshop Elements as a way to both convert the colour image to black and white (desaturate) and also to control how the colours are represented in the greyscale. Like a lot of Russell’s techniques it leaves the original image unchanged in the background, and hence this style of image enhancing is called non-destructive editing 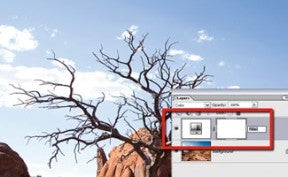 STEP 1
Make a new Hue/Saturation adjustment layer above your background. Don’t make any changes to the default settings for this layer. Set the mode of the adjustment layer to Color. Label
this layer ‘Filter’. 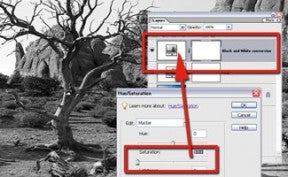 STEP 2
Make a second Hue/Saturation layer above the Filter layer and alter the settings so Saturation is -100. Call this layer Black and White conversion. The mono image now on screen is what we would expect if we just desaturated the coloured original. 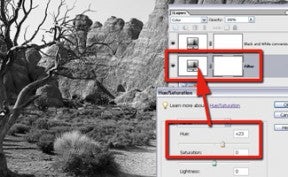 STEP 3
Next double-click on the layer thumbnail in the Filter layer and move the Hue slider. This changes the way that the colour values are translated to black and white. Similarly, if you move the Saturation slider you can emphasise particular parts of the image. 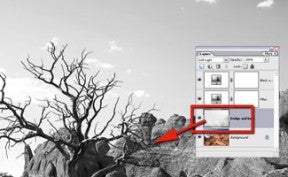 STEP 4
Finally, introduce some dodging and burning by adding a blank layer above the background layer. Change the Blend mode of this layer to Soft Light and then ‘burn in’ using a black soft-edged brush or ‘dodge’ using a white soft-edged brush.