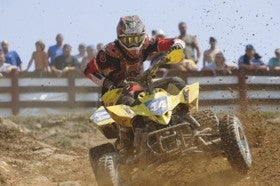 If it’s a constant focus that you require on a moving subject, then Continuous AF maintains the focus but is, however, not always accurate for taking a sharply focused picture. This is because there is a short time lag between when the shutter is pressed and when the picture is actually taken – this is referred to as the release time lag. The way to solve the problem is the Predictive Focus Tracking System, a feature on many DSLRs. This method forecasts the position of the subject at the moment the image is captured based on the measurement of the subject’s movement, and shifts the lens elements accordingly. In essence, it detects the subject’s speed of motion by taking the release time lag into consideration.

This option is effective for taking pictures of an object moving at a constant speed towards the camera, but it does not provide maximum focusing performance for a subject that abruptly changes direction or one with low contrast moving randomly. To focus accurately on such a subject, the autofocus system must accumulate more data on the subject’s movement using multiple focus areas – as mentioned earlier – so that an appropriate judgment can be made.

What to Focus On?

In terms of portraiture, the eyes are the obvious focus point, being as they are the ‘windows of the soul’. If the person is further away then you would be better advised to concentrate on the face, to really bring out the features. And by opening the aperture wider you will create a shallower depth of field, drawing the viewer’s attention to the face and not have them drift off to the background. If, on the other hand, you are attempting a landscape image, you could focus on a particular point of the composition – say, a hill in the foreground. An aperture of f/11 or smaller would work well here, but do bear in mind that you are trying to draw the viewer in so a certain focal point is key.

Depth of Field and Focusing

Precise focus is possible at only one distance. At any other distance, the object will be de-focused, and will produce a blurred image. This is where depth of field becomes involved. Depth of field describes the range in a photograph, from near to far, that appears to be in focus. The more a lens is opened up – for example, to an aperture of f/4 – the less depth of field there will be (i.e. the foreground will be in focus and the background will appear blurred). If you require all the elements of your composition to appear sharper, you should stop the lens down to an aperture with a higher numerical value, such as f/16.
When you are taking headshots of people a shallower depth of field proves beneficial, as this isolates them from any distracting background detail, whereas for a landscape shot, a deeper depth of field often ensures that every detail is bought into focus.