Raw vs jpeg: Don't know which file format you should be using for your images. What is the difference between Raw files and Jpeg files? We examine the pros and cons of Raw vs JPEG files.

When any digital camera takes a picture, the likelihood is that the result will be saved as a JPEG file. This is what’s written to your camera’s memory card, and it contains all the data for that particular image. It requires little room and is automatically processed to be ready for use, and for everyday images it’s a perfectly suitable choice for storage.

But, as anyone who uses a DSLR will know it’s not the only one available, and many will opt for an alternative where quality is key.

This alternative format is known as a Raw file, an option offered on all DSLRs and also on some enthusiast compacts. But what are the differences of Raw vs jpeg files?

Unlike a JPEG, a Raw file cannot be used immediately and it takes up considerably more room – and most software programs will be unable to recognise it. Even so, for the photographer willing to put in some time and effort, it’s the only one they will use. 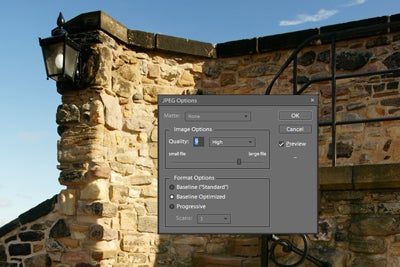 Compression – When a JPEG is saved, the photographer is able to choose the level of compression applied to that file. The more a file is compressed, the more its quality is compromised.

All compact cameras and DSLRs are capable of recording a JPEG file, whose main advantage lies in it being a compressed format.

In actual fact, the name ‘JPEG’ refers to a method of image compression rather than a file format, although it has been universally adopted to serve the latter purpose.

What it allows is for images, once taken, to be saved at a fraction of their size. A file which would ordinarily weigh in at 34MB, for example – such as that from a 12MP DSLR – will typically be saved closer to 3MB when default settings are used, and as a result more images can fit onto a memory card or hard drive.   This benefit has meant that the JPEG format has been widely adopted in the imaging industry.

An image saved in this way will be recognised by everything from a computer, television or digital photoframe, to an iPod or another portable media player. It can be read by any mainstream editing or viewing program and, on the whole, it needs no further adjustment as all the work has been done for you.

It sounds like an ideal format – but, sadly, it isn’t.   One reason for this is that the file has already been processed in-camera. It’s the camera’s internal software (known as firmware) which has decided how much sharpening the image requires, what the colours will look like and what the white balance will be, among many other things.

As sophisticated as today’s cameras are they don’t always always get it right, and it’s possible the image won’t have reached its full potential. Furthermore, cheaper camera’s don’t allow any control over certain aspects of this processing (such as noise reduction), which means you’re stuck with whatever decisions the camera has made.

Another disadvantage is the method of compression used, and its effect upon the image. Compression can be done in one of two ways: either in a lossy way (which is standard) or through a lossless method. The difference between the two is that the former will lose some data as this happens while the latter will not, as it attempts to discard any redundant information for the file to be made smaller.

So what is this redundant information? If you imagine a photo of a landscape with plenty of unbroken blue skies, you’ll be able to appreciate that many parts of the image will essentially be either the same or very similar at the pixel level. The camera knows this, and when it records an image to a compressed format such as JPEG, it only keeps whatever parts of the image it needs in order to reconstruct the rest.

When an image is heavily compressed to produce a smaller file, it becomes harder to reconstruct the scene faithfully, and so the quality worsens. This can lead to an effect known as posterisation, where the smooth tonal gradations in an image are lost, in turn making separations between different tones more apparent. 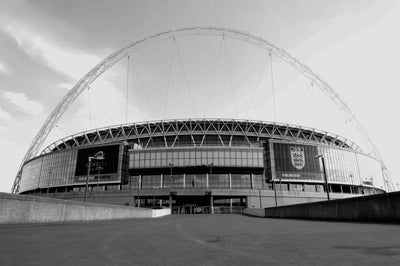 Tonal gradations – If a JPEG is processed too far, it’s possible for undesirable effects to appear. Here, the smooth tonal gradations in the sky have been replaced by more defined bands.

A Raw image is often considered as the equivalent of a photographic negative, in that the basic part is there but with the potential for many changes before it is considered final.

The format forgoes the processing that a JPEG file receives in camera, and with it the compression of the file. As such, a Raw file will take up considerably more room, and will slow down any continuous shooting as your camera records the information to the card.   Opening up your Raw file on a computer will reveal it to be relatively ‘flat’, with low contrast, poor sharpness and possibly even noise – and as it hasn’t yet been processed, this shouldn’t come as much of a surprise.

If you use the software which came with your camera for this task, it will usually be possible to apply one of the camera’s preset modes – such as portrait, landscape or black and white – which you may have had used upon capturing the image (although such presets are also available in other programs such as Photoshop).

If you know a particular style will fit a particular image, using one of these presets will save you time and take some of the guesswork out for you, though you can always choose to further tweak any adjustments as required.

Some things you won’t be able to change, such as the sensitivity you chose prior to recording the image, or any focusing errors. But almost everything else, from the exposure and white balance to colour space and noise reduction can be altered – and therein lies its great advantage. You can take all the time you need to buff and polish the file up till you’re happy with it, and as you place the power to do this in your own hands, you immediately see what effects your processing has on other parts of the image. This is important, as an adjustment in one area may be to the detriment of another, and it’s not something a camera will necessarily consider. 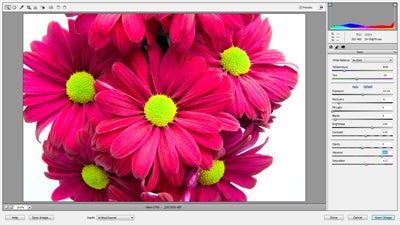 So why not just edit JPEGs?

JPEGs can, of course, be edited, but Raw files again have the advantage of holding more information before any processing has taken place. The reason for this is because JPEGs are (almost always) stored as 8bit files, which means that each red, green and blue colour channel can has a choice of 256 values. Multiplying these values (256x256x256) reveals that the image as a whole can contain around 16.7 million colours. By contrast, the Raw mode on today’s cameras may hold either 12 or 14 bits per channel, which gives the potential for 42bit colour images.

Although 16.7 million colours sounds sufficient, any processing you do pulls and stretches the information within that file until the image begins to suffer.

Because of the extra information it contains, a Raw file has a far higher tolerance to processing and is able to maintain subtle details to a greater degree, such as in highlight and shadow areas.

Furthermore, any mistakes can easily be changed without fuss – it’s only when you output that Raw file from the editing space for further processing, or save it in another format, that you need to make sure your editing hasn’t compromised image quality. This is known as non-destructive editing, as your editing is saved alongside the original Raw file, rather than affecting the file directly.

Few photographers will be inclined to process every image they take from a Raw state, because for everyday snapshots a JPEG tends to suffice.

For more critical work, however, and particularly for images taken under difficult shooting conditions, there are many reasons why you should be shooting a Raw file. The only tricky part is understanding which adjustments you need to make and how to go about doing so with your chosen software – but with a little practice this isn’t out of anyone’s reach.