Some people will say that it would be a waste of money to fit a full-frame lens on an APS-C camera body but the ability to use one lens for two formats is an appealing possibility.
Given that possibility, the next suggestion might be that if a lens performs well over the area of a full-frame sensor then it is bound to do at least as well (and probably better) when used with a smaller sensor. This, however, overlooks the pixel-size issue.

Smaller pixels, as commonly found on smaller-format sensors, have the potential disadvantage of approaching the size of the diffraction disk at small lens apertures. This means that fine detail may be lost sooner when a smaller sensor is used. Similar, but differently originating, effects also appear at wide apertures due to chromatic or other aberrations.

These drawbacks may be partially offset by the fact that an APS-C sensor records its image using only the central area of the lens coverage, and therefore ought to be able to enjoy higher resolution.

As a result, the MTF curve that might be expected when a well-behaved full-frame lens is fitted to an APS-C camera could well include slight drops in performance at the extreme ends of the aperture range but a gain in resolution for other apertures. Significantly, that is exactly what this review has found.

Alongside its full-frame testing, Nikon’s new AF-S 24-70mm f/2.8G ED zoom was also evaluated using a DX-format (APS-C) Nikon D80 body. The MTF curves obtained for the D80 remain tightly entwined and their peak is at a higher resolution but there is a greater curvature to the lines. Only when fully stopped-down is the zoom’s performance (very slightly) worse on the D80 than it is on the D700. 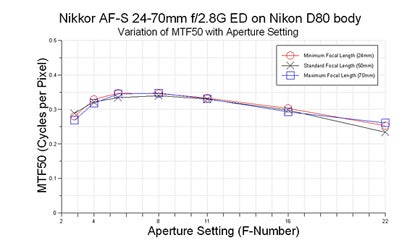 The most important result of this test is not to conclude that a D80 image might theoretically trump one from a more expensive camera but rather to confirm that the very considerable investment that a pro-spec 24-70mm zoom requires will prove justified regardless of the sensor format on which the lens is used.

Every now and again a new technology is added to the list of benefits that lenses enjoy: Nikon’s new Nano-Crystal Coating is one such new arrival. Lenses that have been coated using this technology exhibit considerably less ghosting from off-axis light sources, which is particularly important in wide-angle lenses that have a greater field of off-axis coverage.
The technology was originally developed by Nikon for optical systems that reduce semiconductor designs onto silicon wafers before a way was found to adapt the coating process to mass-manufactured lenses and to toughen it to withstand professional use.
So important does Nikon view its unique new technology that a large N is emblazoned on lenses, including the Nikkor AF-S 24-70mm f/2.8, that have Nano-Crystal Coating. The same technology has also been applied to the AF-S 14-24mm f/2.8 and to the AF-S 300mm f/2.8 prime. Looking at these lenses obliquely in comparison with a conventionally coated lens reveals that Nano-Coated lenses show much less colour on their surface, indicating that the transmitted light is also much less coloured and thereby reducing the obviousness of ghost areas within the image.
For more information go online to: http://imaging.nikon.com/products/imaging/technology/scene/20/index.htm.

All three of these lenses have street prices between £1,000 and £1,300 and all three boast a very high level of build and image quality. They are described as pro-spec lenses and rightly deserve that description.

Sony’s Carl Zeiss lens is the best looking and is also the most compact. Canon’s lens is a solid performer with an excellent pedigree and reputation that only years in the field can secure. Nikon’s lens suffers from its greater barrel length, but it is also the fastest to focus and delivers the best MTF results.

None of these lenses has any serious weaknesses but all could be improved in little ways. Sony’s lens is just a bit too stiff to zoom comfortably; Canon’s lens has the loosest MTF curves; Nikon’s lens casts a shadow when it is used in conjunction with the D700’s pop-up flashgun.
Nikon’s Nano-Crystal Coating technology, which was originally developed for imaging systems used in semi-conductor manufacturing, offers a theoretical advantage that was not investigated as part of this test. That said, the Nikkor produced the most exquisite images of the three lenses examined here. Despite its marginally higher price and slightly awkward size, Nikon’s lens was easily my personal favourite.

That said, there can be no true winners and losers because if you are a Sony user then Sony’s lens is the one that you will buy, and so on. In terms of desirability, however, the Nikkor must come top when the head is making the decisions and the Zeiss will probably win in a beauty contest. The Canon is the one that countless professionals are using but maybe the new Nikkor will change that.