Nikon’s brand new 24-70mm zoom is one of those lenses thathas a ridiculously long list of credits in its specifications. The official name indicates only a professional G-series design and the use of extra-low dispersion glass but its subtitle (written on the underside of the lens barrel) adds mention of internal focusing, aspherical profiles, a Silent-Wave Motor and Nano-Crystal coating technology.

To be fair, internal focusing coupled with low-dispersion glasses and aspherical profiles are de rigueur in pro-spec 24-70mm zooms so perhaps it is wise for Nikon to play them down. The Silent-Wave Motor, however, is a raging success: as well as being very quiet it is also amazingly quick and accurate. 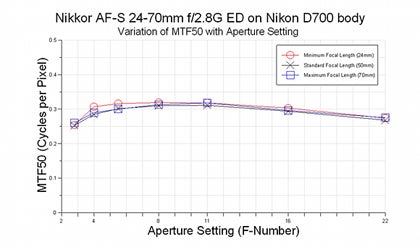 The new Nikkor is equally impressive when it comes to image quality. Its MTF curves are above the critical 0.25 cycles per pixel at every aperture and every focal length tested. Peak performance, at 0.3 cycles per pixel and upwards, is obtained between f/5.6 and f/16.
Chromatic aberration, which is undesirable but forgivable in small amounts at the wideangle setting of a zoom such as this, exists only at very low levels indeed and is totally absent at focal lengths above 50mm.

Handling is very good but the considerable length of the lens can result in a slightly unbalanced feel with a more rearward grip, as is required for confident use of the zoom ring. The forward-mounted focusing ring is silky smooth and offers just the right amount of resistance.
The fly in the ointment is the fact that the same considerable length also risks casting a shadow when pictures are taken using a camera’s pop-up flashgun. It is true that this is not a professional’s modus operandi (and this is most certainly a professional’s lens) but in case of emergency it will be frustrating to see an unsightly semi-circle at the bottom of the picture. Perhaps in the future Nikon will design a lens that is every bit as good as this one but also significantly shorter. In the meantime other manufacturers may feel slightly on the back foot when they see what Nikon has already managed to achieve. 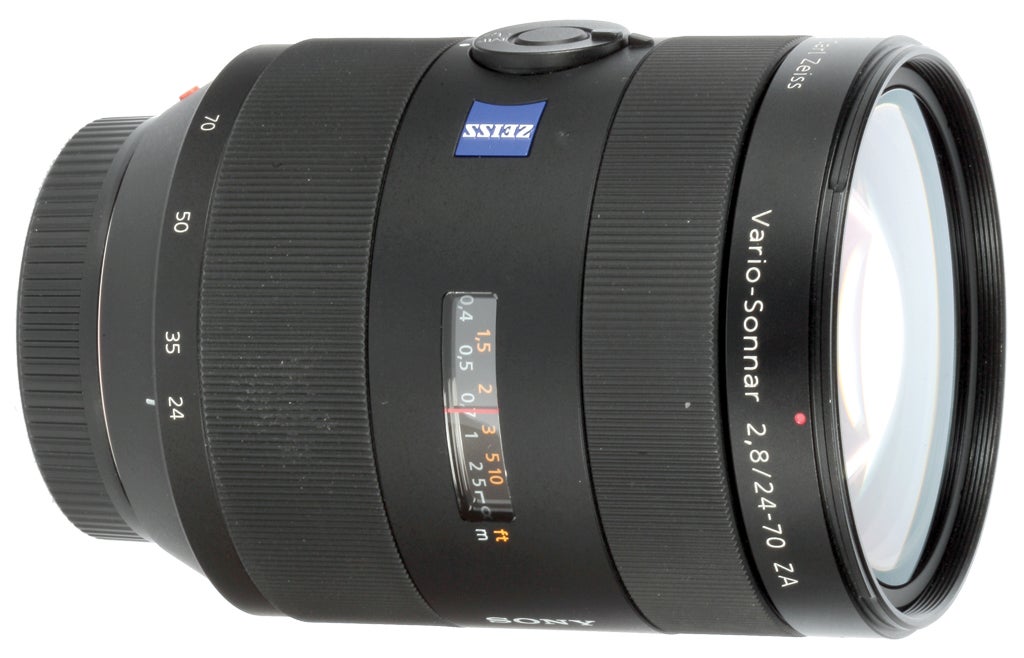 enjoys the same Vario-Sonnar lineage that made the German manufacturer famous throughout the film-camera world. It is also good-looking thanks to a highly streamlined design that features a constant diameter right along the barrel’s length (excluding the mounting flange itself) and a fairly modest length.

The manual-focusing ring is foremost and has a very good feel; the zoom ring is behind and, on the review sample at least, verges on being slightly too heavy to be truly comfortable. AF speed, provided by an aptly-named Super-Sonic Wave Motor, is good and its accuracy is high. Switching between AF and manual-focusing is carried out using a rotating switch that falls right under the user’s left thumb. Sadly, the rotating action is not as easy on the thumb as a simple slide-switch, which is employed by other manufacturers in this application.

Optically, the CZ 24-70mm zoom displays a well-matched set of MTF curves and it appears that Zeiss has gone more for consistency than for a pronounced sweet-spot in image quality. Wide-open and fully-closed resolutions are slightly lower than elsewhere but from f/4 to f/11 the lens stays solidly in the 0.25-0.30 cycles per pixel range at all focal lengths. There is a small amount of chromatic aberration at the 24mm setting, especially towards the edges of the field but this is unlikely to be obtrusive. 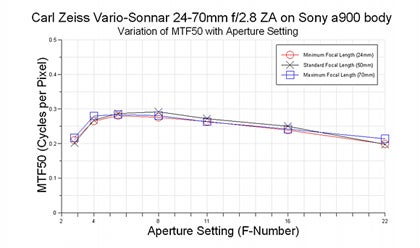 Thanks to internal-focusing there is no movement of the front element, nor of the manual-focusing ring, and with only just over 30mm of extension during zooming (despite a continuous forward movement) this is a very compact lens overall. Even more impressive, given its well-contained proportions, is the fact that the Zeiss lens manages to focus slightly closer than Nikon’s and Canon’s equivalent zooms.

A classy protective pouch is provided with the lens, as is a petal-shape lens hood.
Overall this is a very good-looking lens that produces consistent results right across the range of commonly-used aperture settings, though at a street price of around £1,300 it is also the dearest of the three.