The Nikon cameras don’t have built-in Wi-Fi, but an optional WT-5 Wireless Transmitter is available. At around £500, it adds considerably to the overall cost.

The Alpha 7R features built-in Wi-Fi for easy image sharing and remote control from a smartphone or tablet. Quick pairing via NFC is available with many Android phones.

The Nikon DSLRs both use essentially the same 51-point phase-detection AF system. It’s impressively fast and can track moving subjects, but it’s inherently not quite as accurate as the contrast-detection method.

The Alpha 7R employs contrast-detection autofocus using the main image sensor, which makes it exceptionally accurate. The focus area can be placed anywhere in the frame, and face detection is on offer too. Autofocus isn’t especially fast, though.

The Nikon F-mount lens set is huge and comprehensive, with pretty much everything on offer, including micro lenses, fisheyes and professional long telephotos. Lots of third-party F-mount lenses are also available.

The Alpha 7R requires FE lenses for full compatibility, with just four available. Sony E lenses will also fit. It can also use Alpha-mount lenses via the LA-EA4 adapter, and a huge range of other lenses via adapters.

Nikon’s F-mount system is one of the best-established on the market, and almost every imaginable lens or accessory is available, covering practically any eventuality. In contrast, Sony’s full-frame E-mount system is still in its infancy. But the Alpha 7R makes up for this with its adaptability to many other lenses, including the extensive Sony Alpha mount range.

The Alpha 7R is also distinctly more portable than the Nikon SLRs, and includes modern features such as built-in Wi-Fi for connecting to a smartphone. The camera body is much cheaper too, although this is offset by relatively expensive lenses. 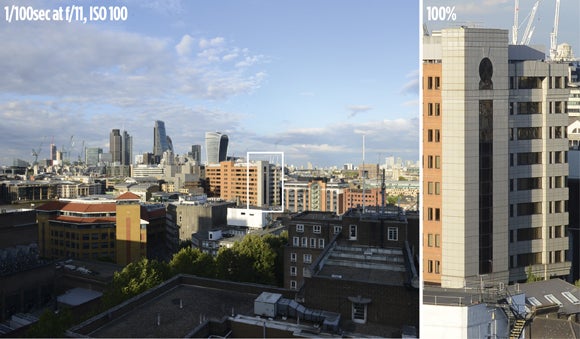 Image: All three cameras perform astonishingly well here, and are able to pick out remarkably fine detail in this wideangle view of the London skyline 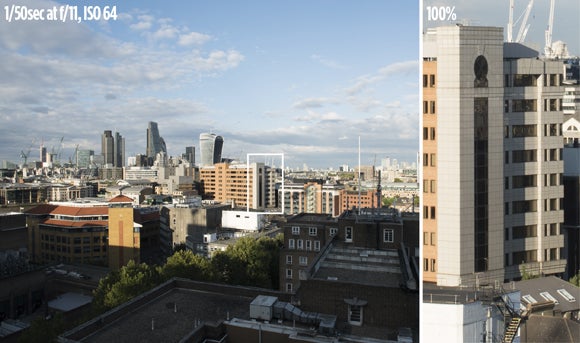 Image: The D810’s base ISO of 64 should, in principle, give cleaner images. It perhaps shows slightly smoother tones in blue skies, but the difference is very subtle 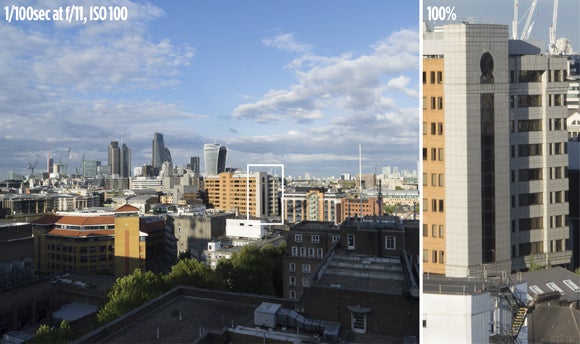 There’s really not much between the D810, D800E and Alpha 7R in terms of image quality, although the D810 may just have a slight edge overall as it has the most up-to-date sensor. But when making a real-world choice between the cameras, I think the sensors are just about the least important consideration.

There’s no doubt that the D810 is a better camera than the D800E. The refined shutter mechanism and electronic first curtain help keep mechanical shake to a minimum, and for live-view work the D810’s vastly improved magnified view makes critical focusing easier. However, I can’t see any obvious difference in resolution between the cameras under ideal conditions, suggesting that Nikon did a very good job in cancelling the OLPF in the D800E.

Probably the biggest difference between the Sony Alpha 7R and the Nikon DSLRs lies in the respective systems, and the availability of lenses. The longevity of the F mount means that practically every kind of lens can be found for the D810 and D800E. Chances are, though, that only relatively modern designs will be able to deliver all the detail that the 36-million-pixel sensor can record. In contrast, the native lens set for the Alpha 7R is limited, but the 55mm f/1.8 is superb.

The Alpha 7R showcases many of the advantages that mirrorless cameras have over DSLRs. Its electronic viewfinder conveys lots more shooting information, including better manual focusing and exposure aids. Switching between the eye-level viewfinder and the rear screen is seamless, and the latter can be tilted to use as a waist-level finder. The system is also much more compact and portable overall. 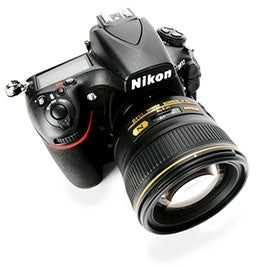 Despite all this, I think the D810 edges out the Alpha 7R as the overall winner in this comparison. It’s just a more evolved and refined camera to use, with a more complete system to back it up. The Sony is an amazing camera on paper, but isn’t quite the finished article yet. However, once the rougher edges have been smoothed and a more comprehensive lens range is available, it has the potential to be a very serious contender.